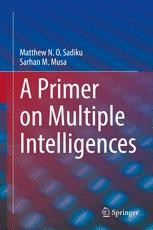 A Primer on Multiple Intelligences

A Primer on Multiple Intelligences is a must-read for graduate students or scholars considering researching cognition, perception, motivation, and artificial intelligence. It will also be of use to those in social psychology, computer science, and pedagogy. It is as a valuable resource for anyone interested in learning more about the multifaceted study of intelligence.

A. Matthew N. O. Sadiku received his B. Sc. degree in 1978 from Ahmadu Bello University, Zaria, Nigeria and  his M.Sc. and Ph.D. degrees from Tennessee Technological University, Cookeville, TN in 1982 and 1984 respectively.  From 1984 to 1988, he was an assistant professor at Florida Atlantic University, Boca Raton, FL, where he did graduate work in computer science. From 1988 to 2000, he was at Temple University, Philadelphia, PA, where he became a full professor. From 2000 to 2002, he was with Lucent/Avaya, Holmdel, NJ as a system engineer and with Boeing Satellite Systems, Los Angeles, CA as a senior scientist.   He is presently a professor emeritus of electrical and computer engineering at Prairie View A&M University, Prairie View, TX.

He is the author of over 900 professional papers and over 90  books including Elements of  Electromagnetics (Oxford University Press, 7th ed., 2018), Fundamentals of Electric Circuits  (McGraw-Hill, 7th ed., 2021, with C.  Alexander), Computational Electromagnetics with MATLAB  (CRC Press,  4th  ed., 2019),  Principles of Modern Communication Systems  (Cambridge University Press, 2017, with S. O. Agbo), and Emerging Internet-based Technologies (CRC Press,  2019).  In addition to the engineering books, he has written Christian books including Secrets of Successful Marriages, How to Discover God’s Will for Your Life,  and commentaries on all the books of the New Testament Bible.   Some of his books have been translated into French, Korean, Chinese (and Chinese Long Form in Taiwan), Italian, Portuguese, and Spanish.

He was the recipient of the 2000 McGraw-Hill/Jacob Millman Award for outstanding contributions in the field of electrical engineering.  He was also the recipient of Regents Professor award for 2012-2013 by the Texas A&M University System. He is a registered professional engineer and a fellow of the Institute of Electrical and Electronics Engineers (IEEE) “for contributions to computational electromagnetics and engineering education.”  He was the IEEE Region 2 Student Activities Committee Chairman. He was an associate editor for IEEE Transactions on Education.  He is also a member of Association for Computing Machinery (ACM) and American Society of Engineering Education (ASEE). His current research interests are in the areas of computational electromagnetic, computer networks, and engineering education. His works can be found in his autobiography, My Life and Work  (Trafford Publishing, 2017) or his website: www.matthew-sadiku.com.  He currently resides West Palm Beach, Florida.    He can be reached via email  at sadiku@ieee.org

B. Sarhan M. Musa, is a professor in Electrical and Computer Engineering Department at Prairie View A&M University. He holds a Ph.D. in Electrical Engineering from the City University of New York. He is the founder and director of Prairie View Networking Academy (PVNA), Texas. He is LTD Sprint and Boeing Welliver Fellow. Professor Musa is internationally known through his research, scholarly work, and his published books. He has had a number of invited talks at international conferences. He has received a number of prestigious national and university awards and research grants. He is a senior member of the IEEE and has also served as the member of technical program committee and steering committee for a number of major journals and conferences. Professor Musa has written more than a dozen books on various areas in Electrical and Computer Engineering. His current research interests cover many topics in the artificial intelligence/machine learning, data analytics, Internet of things, wireless network, data center protocols, and computational methods.
Show all