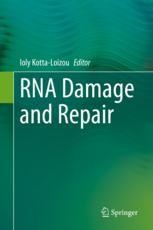 Ribonucleic acid (RNA) is a macromolecule that plays a central role in cell physiology: RNA molecules act as intermediates between the deoxyribonucleic acid (DNA), where genetic information is stored, and proteins, which perform the necessary functions within the cell. Traditionally, the structural and functional properties of RNA are closely linked to gene expression.

This book presents an overview of the biology of RNA damage, protection and repair in prokaryotes and eukaryotes. Individual chapters cover the expression regulation, enzymology and physiological role of such systems, and link them to important human diseases such as cancer and degenerative diseases.

About the Editor: Dr Ioly Kotta-Loizou is currently a Research Associate in the Department of Life Sciences, Imperial College London, UK. She is also a Visiting Lecturer at University of Hertfordshire and an Honorary Lecturer at University of Manchester. She holds a BSc in Biology, a MSc in Bioinformatics and a PhD in Molecular Microbiology from the University of Athens, Greece. Ioly has a keen interest in microorganisms and her studies focus on microbial life cycles and pathogenicity, together with potential applications in medicine and agriculture. Currently, she investigates RNA expression, damage and repair in bacteria, and how these processes can be linked to antibiotic resistance. In parallel, she explores how RNA viruses found in pathogenic fungi targeting humans, plants or insects can potentially be used in biological control. Ioly is a Fellow of the Higher Education Academy, and teaches next-generation sequencing and virology to undergraduate and postgraduate students. She is a member of the RNA Society, an Editor for the scientific journals Archives of Virology, Viruses, Pathogens, Microorganisms and Frontiers, and a Chair in the International Committee on Taxonomy of Viruses.