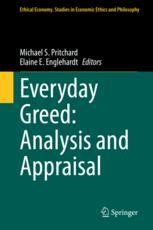 This collection examines how greed should be understood and appraised. Roundly condemned by virtually all religions, greed receives mixed appraisals in the domains of business and economics. The volume examines these mixed appraisals and how they fare in light of their implications for greed in our everyday world. Greed in children is uniformly criticized by parents, other adults, and even children’s peers. However, in adulthood, greed is commended by some as essential to profit-seeking in business and for offering the greatest promise in promoting economic prosperity for everyone.
Those who advocate a more permissive position on greed in the adult world typically concede that some constraints on greed are needed. However, the supporting literature offers little analysis of what greed is (as distinct from, for example, the effort to meet modest needs, or the pursuit of ordinary self-interested ends).  It offers little clarification of what sorts of constraints on greed are needed. Nor is careful attention given to difficulties children might have in making a transition without moral loss from regarding greed as inappropriate to its later qualified acceptance. Through a secular approach, this book attempts to make significant inroads in remedying these shortcomings.

Michael S. Pritchard is Emeritus Professor of Philosophy and founding director of the Center for the Study of Ethics in Society at Western Michigan University.  He continues occasionally to teach courses in practical ethics, business ethics, media ethics, the history of 18th century Scottish moral philosophy (Thomas Reid, Adam Smith, and David Hume), as well as the philosophical thinking of children. He is a founding member of the Association for Practical and Professional Ethics (APPE) and of the Society for Ethics Across the Curriculum (SEAC). For 7 years he served as co-editor, with Elaine Englehardt, of SEAC’s official journal, Teaching Ethics.  Among his many publications are: Philosophical Adventures With Children (University Press of America: 1985); On Becoming Responsible (University Press of Kansas: 1991); Communication Ethics, with James Jaksa (Wadsworth: 1988 & 1994); Engineering Ethics: Concepts & Cases, with C.E. Harris, Michael Rabins, Ray James, Elaine Englehardt (Cengage: 1995, 2000, 2005, 2009, 2013, and 2018); Reasonable Children (University Press of Kansas: 1996); Professional Integrity (University Press of Kansas: 2007); Ethical Challenges of Academic Administration, co-edited with Elaine Englehardt, Kerry Romesburg, and Brian Schrag (Springer: 2010); Obstacles to Ethical Decision-Making, with Patricia Werhane, Laura Hartman, Crina Archer, and Elaine Englehardt (Cambridge University Press, 2013); Ethics Across the Curriculum—Pedagogical Perspectives, co-edited with Elaine Englehardt (Springer: 2018).

Elaine Englehardt is the Distinguished Professor of Ethics and Professor of Philosophy at Utah Valley University (UVU).  For almost thirty years, she has written and directed seven multi-year, national grants in the area of Ethics and Ethics Across the curriculum. One grant founded the Ethics program at UVU, and another funded the Society for Ethics Across the Curriculum and the journal Teaching Ethics. She is currently President of the Society for Ethics Across the Curriculum (SEAC), after serving as a founder (1999) and board member. For seven years she served as co-editor of Teaching Ethics, the official journal of the Society for Ethics Across the Curriculum with Michael Pritchard. Among her publications are: Interpersonal Communication Ethics: Friends, Intimates, Sexuality, Marriage and Family (Harcourt Brace, 2001); The Organizational Self and Ethical Conduct: Sunlit Virtue and Shadowed Resistance (Harcourt Brace, 2001), with James A. Anderson; Media Ethics for a Principled Society (Wadsworth, 2002), with Ralph Barney; Ethics and Life: An Interdisciplinary Look at the Humanities (McGraw Hill, 2010), with Don Schmeltekopf, 1-4th editions; Ethical Challenges of Academic Administration (Springer, 2010), edited with Michael Pritchard, Kerry Romesburg, and Brian Scrag; Obstacles to Ethical Decision-Making (Cambridge 2013), with Patricia Werhane, Laura Hartman, Crina Archer, and Michael Pritchard; Taking Sides: Business Ethics, 11, 12 13, 14th  editions (McGraw-Hill, 2014), edited with Lisa Newton and Michael Pritchard; Ethics Across the Curriculum, Pedagogical Perspectives, with Michael Pritchard, Netherlands: Springer, 2018; Engineering Ethics: Concepts and Cases (2019), with C.E. Harris, Michael Pritchard, and Ray James, New York: Cengage.  She has written numerous peer reviewed articles and over a dozen book chapters.  She has served in various administrative positions at Utah Valley University including vice president, associate vice president, dean and director. Her PhD is from the University of Utah.