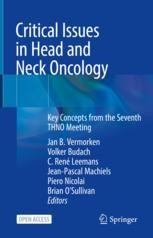 Readers will learn about the latest drug developments and epidemiological aspects in cancers ranging from Head and Neck Squamous Cell Cancer to Nasopharynx cancer.

Edited by a team of world leaders in Head and Neck Cancer, this volume serves as an easy reference to the head and neck oncology practitioner and provides a contemporary overview for specialists the field. The chapters are based on the latest data presented at the 7th Trends in Head and Neck Oncology Conference and reflect the most up-to-date information in the field.

Prof. Jan B. Vermorken started his medical training in 1961, graduated in 1970 from the University of Amsterdam, the Netherlands, and became a board-certified specialist in internal medicine in 1975. Since that time he has worked in the field of Medical Oncology and was officially registered as a Medical Oncologist in the Netherlands in 1992. He received his PhD in Medical Sciences in 1986 from the Vrije Universiteit in Amsterdam. From May 1997 until October 1, 2009, he was appointed Professor of Oncology at the University of Antwerp (UA), and head of the Department of Medical Oncology at the University Hospital Antwerp (UZA), in Edegem, Belgium. After his retirement he remains connected to both University (Emeritus Professor) and University Hospital (consultant). His main fields of interest are head and neck oncology and gynecologic oncology. He chaired both the Head and Neck Cancer Group (2006-2009) and the Gynecologic Cancer Group (1983-1989) of the European Organization for the Research and Treatment of cancer (EORTC). He was founding chair of the Gynecologic Cancer InterGroup (GCIG: 1997-2003) and strongly involved in establishing the Head and Neck Cancer International Group (HNCIG) in 2015. He devotes a large part of his time to teaching, professional training, and continuing medical education.

Professor Vermorken is member of various scientific societies, member of several editorial boards of International journals, reviewer of multiple cancer journals and author or co-author of more than 700 publications. He was Editor-in-Chief of Annals of Oncology from 2009 to 2014 and is chief editor of the head and neck cancer section of The Oncologist (since 2003), and the head and neck section of Frontiers in Oncology (since 2015), is editorial chair of ONCOhemato (multidisciplinary journal; since 2007) in Belgium and chairs Oncotherapie (an internet platform) in The Netherlands (since 2007). He received the ESMO award in 2007 and on March 1, 2013 he received the title of Commander in the Order of Leopold for his contributions to oncology.

Jean-Pascal Machiels MD, PhD, is head of department of medical oncology and director of the Institut Roi Albert II Cancer centre, Cliniques universitaires Saint-Luc, Université catholique de Louvain (UCLouvain), Brussels Belgium. He trained at Université Catholique de Louvain, Brussels, Belgium, where he gained his MD in 1993 and his PhD in 2001 and at Johns Hopkins School of Medicine, Baltimore USA, where he was a Fellow in Medical Oncology from 1998 until 2000,. His main interests include Head and Neck cancer, and phase 1 clinical trials. He has published more than two hundred papers reporting on clinical trials and translational research.

Prof. Volker Budach. MD is Head of the Depts. for Radiation Oncology at the Charité University Medicine Berlin. He became a board certified radiation oncologist at the University of Essen in 1985 and was appointed as full professor and chair of the Dept. for Radiation Oncology at the Charité University Clinics in 1993. He was board member and treasurer of the ESTRO during 1996 and 2004 and chairman of the EORTC-Radiooncology Group during 2000-2003, followed by the chairmanship o^ 330 peer reviewed publications cited in Pubmed

Professor C. René Leemans, MD, PhD is chair of the Department of Otolaryngology Head and Neck Surgery at the Amsterdam University Medical Centres, VUmc, Amsterdam. He is Director of the Advanced Fellowship Program in Head and Neck Surgery and Oncology at the VU University Medical Centre Amsterdam. His special interests include head and neck oncology, reconstructive and microvascular surgery, and basic research. René Leemans has made a sustained and internationally recognised contribution to cancer care and research in the field of head and neck oncology over the past decades. His scientific standing has been recognised by election as President of the Netherlands Society of Otolaryngology-Head and Neck Surgery, and the Dutch and European Head and Neck Societies. He also serves on the Leadership of the American Head and Neck Society (AHNS). He (co-)authored more than 400 papers and book chapters on head and neck oncology and is regularly invited to speak at international conferences and tutor at courses. He leads the successful Make Sense Awareness Campaign.

Professor O’Sullivan is the inaugural Bartley-Smith/Wharton Chair (Emeritus) in Radiation Oncology and immediate past Chair of the Head and Neck Program at the Princess Margaret Cancer Centre, University of Toronto. He is the Co-chair of the Head and Neck Steering committee of the US National Cancer Institute and Editor-in Chief of the UICC Manual of Clinical Oncology. He is Chair of the UICC Prognostic Factors Classification Committee, and Chair of the UICC Head and Neck Committee, co-editor of the UICC TNM Classification of Malignant Tumours and Liaison the AJCC Expert Committee on Head and Neck Cancer. He is also well recognized expert in the management of sarcoma and a past-President of the Connective Tissue Oncology Society (CTOS). He is one of three clinician members of the International Commission on Radiation Units (ICRU). Professor O’Sullivan has received multiple awards and honors for his work including, most recently, the 2020 American Society of Radiation Oncology (ASTRO) Gold Medal, the highest honor bestowed by the Society on revered members who have made outstanding contributions to the field of radiation oncology. This includes research, clinical care, teaching and service. He has lectured extensively throughout the world, and has published over 400 peer-review papers, more than 80 book chapters and edited more than 10 oncology textbooks.