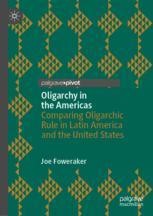 Oligarchy in the Americas

Comparing Oligarchic Rule in Latin America and the United States

This book explores the continuity of oligarchic rule in the Americas of the modern period, with a focus on the variable compatibility of oligarchic rule and democratic government. This focus sets the terms for a comparative inquiry that creates a novel perspective on the politics of Latin America and the United States alike. The continuity depends on the formation of a patrimonial State and a porous division between oligarchic interests and the public sphere of democratic politics; but it also depends on a capacity to adapt and change, and these changes are marked by successive and distinctive modes of rule in both Latin America and the United States. The book concludes with a description and comparison of the sequences and political characteristics of these modes of rule and discovers a recent and remarkable convergence of oligarchic rule in the Americas.

‘This is an engaging and thoughtful book that addresses the most central issues in the study of contemporary politics and offers a new interpretation of the politics of the Americas that highlights the persistence of oligarchic power and patrimonialism. Joe Foweraker draws on his considerable knowledge of the Americas and his capacity for elaborating big ideas to push our thinking forward. There is no book quite like this in terms of topic and scope’.

‘This book offers a bold and compelling effort to compare the politics of Latin America and the United States within a single theoretical framework, effectively challenging the claim to American exceptionalism and the superiority of its democracy. Foweraker draws evidence from major works on political development, past and present, to deliver a lucid interpretation of what ails democracy in the Americas, both North and South. His diagnosis demonstrates the power of his explanatory framework’.

‘Is the USA developing into an exclusionary oligarchy resembling the longstanding pattern prevalent in Latin America? In this brilliantly iconoclastic book, Joe Foweraker provides convincing evidence that in the USA the tensions between the inclusivity that comes from democratic control and the exclusivity that is the hallmark of oligarchy have been moving inexorably in favour of the latter. As in Latin America, US democracy is often little more than a veneer overlaying exploitative oligarchic power’.