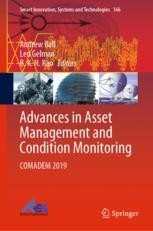 This book gathers select contributions from the 32nd International Congress and Exhibition on Condition Monitoring and Diagnostic Engineering Management (COMADEM 2019), held at the University of Huddersfield, UK in September 2019, and jointly organized by the University of Huddersfield and COMADEM International. The aim of the Congress was to promote awareness of the rapidly emerging interdisciplinary areas of condition monitoring and diagnostic engineering management. The contents discuss the latest tools and techniques in the multidisciplinary field of performance monitoring, root cause failure modes analysis, failure diagnosis, prognosis, and proactive management of industrial systems. There is a special focus on digitally enabled asset management and covers several topics such as condition monitoring, maintenance, structural health monitoring, non-destructive testing and other allied areas. Bringing together expert contributions from academia and industry, this book will be a valuable resource for those interested in latest condition monitoring and asset management techniques.

Andrew’s research expertise is in the detection and diagnosis of faults in mechanical, electrical and electro-hydraulic machines, in data analysis and signal processing, and in measurement systems and sensor development. He is the author of over 300 technical and professional publications, and he has spent a large amount of time lecturing and consulting to industry in all parts of the world.

Andrew has to date graduated more than 100 doctoral degrees in the fields of Mechanical, Electrical and Diagnostic Engineering, he holds honorary professorial positions at 6 overseas universities, and he sits on 3 large corporate scientific advisory boards.

Len is Chair of International CM Groups of ICNDT and EFNDT and Member of ISO Technical Committee, Condition Monitoring. Len made 42 plenary keynotes at major international conferences. He was Visiting Professor at ten Universities abroad.

Prof. Dr. B.K.N. Rao is the Director of COMADEM International, UK. Back in 1988, he firmly believed in the proactive interdisciplinary based philosophy of condition monitoring and diagnostic engineering management (COMADEM). Since then with the collaboration of many well-known universities, research and development organisations and professional bodies, he has organised annual international congresses and exhibitions on this theme in many different parts of the world. COMADEM is now recognised by many as an international platform where representatives from industry and researchers meet, shaping the future and creating value. He has supervised and externally examined a number PhD projects and published in excess of 150 original papers in many scientific and engineering journals. He has edited/co-edited more than 35 books and conference proceedings in the field of COMADEM. He gained his B.Sc in Physics, chemistry and Mathematics from the University of Mysore; Post graduate Diploma of the Indian Institute of Science (DIISc) in Industrial Administration; M.Sc in Environmental and Human Factors in Engineering from the University of Southampton; PhD in Mechanical Engineering from the University of Birmingham. In 2004, he was awarded the Higher Doctorate in Technology (DTech) from the Sunderland University for “his significant, sustained and distinguished contribution in the field of Condition Monitoring”.