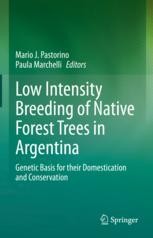 Genetic Basis for their Domestication and Conservation

Global climate change requires the development of programs that consider the active restoration of degraded forests and the use of native trees in afforestation to preserve the natural environment. International commitments like the UN REDD program, the Montréal Process and the Convention on Biological Diversity call for the breeding of species rarely contemplated by large industrial companies. Low-intensity breeding is the most rational strategy for those species: simple but robust, and not dependent on continuously increasing funding, and therefore effective even with a relatively small budget. It commonly focuses on high genetic diversity rather than improving economic traits and adaptability rather than productivity. Controlled crosses with full pedigrees typical of high-intensity breeding are replaced by open pollination.

This book presents state-of-the-art breeding strategies from the last two decades for several forest tree species of prime importance in the natural forests of Argentina. They are distributed in the three main forestry ecoregions of the country: the subtropical dry forest (Chaco), the subtropical rain forests (Yungas and Alto Paraná rainforests) and the temperate forests of Patagonia. The book also discusses the genetic patterns of the selected species defined using genetic markers together with the analysis of the variation in quantitative traits. Further, it examines the crucial features of their reproductive biology, such as the mating system and gene flow and describes the current breeding programs. Lastly, it presents the latest developments in genetic resources and their emerging applications, concluding with some reflections and perspectives related to the conditioning imposed by climate change.

A forest scientist who graduated from the National University of La Plata (Argentina) in 1992, he started his research career in 1994 at the newly formed Unit of Ecological Genetics and Forest Improvement at the National Institute of Agricultural Technology (INTA) in Bariloche, with a scholarship from the National Scientific and Technical Research Council of Argentina (CONICET). In 1997 he obtained a scholarship from the German Academic Exchange Service (DAAD) to pursue his doctorate at the University of Göttingen, continuing his studies with genetic markers in Patagonian Cypress. Upon his return to Argentina in 2001, and after a postdoctoral fellowship, he entered the CONICET Scientific Researcher Career, where he currently holds the rank of Independent Investigator working at INTA Bariloche. In 2015 he took on a managerial position as director of the INTA’s national project for the genetic improvement of native forest tree species.

His work focuses on the genetics of forest populations, including research on several Patagonian forest tree species (Austrocedrus chilensis, Nothofagus alpina, N. obliqua, N. pumilio), mentoring students and teaching postgraduate courses. His current research is related to adaptive processes, based on the analysis of variation of quantitative traits.

Graduating in Biology at the National University of Mar del Plata (Argentina) in 1993, she began her scientific career in 1994 at the Unit of Ecological Genetics and Forest Improvement at the National Institute of Agricultural Technology (INTA) in Bariloche. In 1997 she obtained a scholarship from the National Scientific and Technical Research Council of Argentina (CONICET) to pursue a PhD studying the genetic variation of Nothofagus nervosa, completing her degree at the National University of Comahue, Argentina, in 2002. During her PhD she was awarded a short-term scholarship from the DAAD (German Academic Exchange Service) to develop research activities at the Forest Genetic Institute in Grosshansdorf, Germany. In 2002 she became postdoctoral fellow in Marburg, Germany, studying the phylogeography of Araucaria araucana. Returning to Argentina, she joined the Scientific Research Council (CONICET), and now holds the position of Independent Researcher. She leads research projects in Argentina as well as in collaboration with the University of Marburg. Her current research areas are related to the adaptation of native species to changing climate conditions, through studies of genetic variation, migration capacity (i.e. gene flow) and responses to abiotic stress.