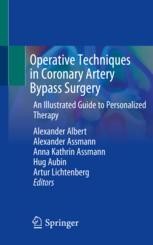 An Illustrated Guide to Personalized Therapy

Operative Techniques in Coronary Artery Bypass Surgery provides invaluable assistance to residents, fellows and trainee surgeons by explaining theoretical and technical aspects of the latest advances in procedural techniques and therapy personalization to optimize CABG surgical outcome. Considering that any heart team depends entirely on the participants’ knowledge and their willingness to cooperate, this work allows cardiologists and the other participants of a heart team to better understand the strengths and limitations of state-of-the-art surgical coronary revascularization. The concepts synthesized within the checklists and decision algorithms provided also enable the reader to develop their knowledge of which technique is the most appropriate for a particular patient.

Alexander Albert, MD is a professor of cardiac surgery and the current director of the department of Cardiovascular Surgery at the Klinikum Dortmund, Germany. Early in his career, professor Albert was strongly influenced by the school of Professor Paul Sergeant in Belgium. He has an internationally recognized experience in Aortic No-Touch Off-Pump (Anaortic OPCAB) and minimal invasive bypass surgery (MICS-CABG). His major focus of clinical and scholarly activities lies in the development and design of individualized surgical therapy for patients with coronary artery disease. Professor Albert draws on wide experience in several managerial positions creating and implementing new departmental processes. Additionally, he has been the head of the Medtronic International Training Center for Anaortic OPCAB and MICS-CABG since its establishment in 2010 at the University of Düsseldorf and currently at the Klinikum Dortmund. Professor Albert is involved in collaborative effort with international experts, for example, as faculty member in the Oxford Masterclass of Heart Surgery led by Professor David Taggart.

Hug Aubin, MD. Attending cardiac surgeon at the Clinic for Cardiovascular Surgery of the University Hospital Duesseldorf. Head of the Mechanical Circulatory Support program. Interested in all types of minimally-invasive cardiac surgery.  Artur Lichtenberg, MD. Director of the Department of Cardiovascular Surgery of the Heinrich-Heine-University Düsseldorf. He has been head of the Department of Cardiothoracic Surgery of the University Hospital Jena (2009) and vice Head of the Department of Cardiac Surgery at the University Hospital Heidelberg (2006-2009). He has extensive experience in all types of CABG, performing minimal-invasive CABG (MIDCAB) since as early as 1998, while training in Hannover under Prof. Haverich. He is a known expert on MIC-surgery and has authored a multitude of scientific and clinical publications.
Show all