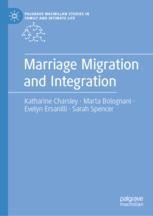 This book provides the first sustained empirical evidence on the relationships between marriage migration and processes of integration, focusing on two of the largest British ethnic minority groups involved in these kinds of transnational marriages – Pakistani Muslims and Indian Sikhs.

In Britain, and across Europe, concern has been increasingly expressed over the implications of marriage-related migration for integration. Children and grandchildren of former immigrants marrying partners from their ancestral ‘homelands’ is often presented as problematic in forming a 'first generation in every generation,’ and inhibiting processes of individual and group integration, impeding socio-economic participation and cultural change. As a result, immigration restrictions have been justified on the grounds of promoting integration, despite limited evidence. Marriage Migration and Integration provides much needed new grounding for both academic and policy debates.

This book draws on both quantitative and qualitative data to compare transnational ‘homeland’ marriages with intra-ethnic marriages within the UK. Using a distinctive holistic model of integration, the authors examine processes in multiple interacting domains, such as employment, education, social networks, extended family living, gender relations and belonging.  It will be of use to students and scholars across sociology, social anthropology, and social policy with a focus on migration, integration, family studies, gender, and ethnic studies, as well as policy-makers and service providers in the UK and across Europe.

Katharine Charsley is Professor of Migration Studies in the School for Sociology, Politics and International Studies at the University of Bristol, UK.

Evelyn Ersanilli is Senior Researcher at the Department of Political Sciences at the University of Amsterdam, The Netherlands.

Sarah Spencer is Director of Strategy and Senior Fellow at the Centre on Migration, Policy and Society (COMPAS) at the University of Oxford, UK.

“The book highlights the interconnection between social domains, as seen in the role of receiving families in channelling migrant spouses towards or away from employment. It also highlights the crucial role of temporal and life-course dimensions, which interact with policies affecting transnational couples in important ways – as with the migrant spouses barred from employment because their overseas qualifications are not recognized, whilst unable to convert their qualifications because of lack of access to student funding, combined with the costs of family-building.” (Kaveri Qureshi, Ethnic and Racial Studies, June 16, 2020)

"Based on innovative research comparing  transnational and intranational  marriages among Pakistani Muslims and Indian Sikhs in the UK,  the authors have refreshingly challenged  simplistic connections between transnational marriages and problematic integration underpinning so many policy responses to family migration in Europe. One hopes academics, policy makers and the media take note.” — Eleonore Kofman, Professor of Gender, Migration and Citizenship, Middlesex University London, UK