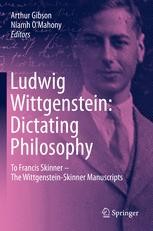 To Francis Skinner – The Wittgenstein-Skinner Manuscripts

In this volume we witness Wittgenstein in the act of composing and experimenting with his new visions in philosophy. The book includes key explanations of the origin and background of these previously unknown manuscripts. It investigates how Wittgenstein’s philosophical thought-processes are revealed in his dictation to, as well as his editing and revision with Francis Skinner, in the latter’s role of amanuensis. The book displays a considerable wealth and variety of Wittgenstein’s fundamental experiments in philosophy across a wide array of subjects that include the mind, pure and applied mathematics, metaphysics, the identities of ordinary and creative language, as well as intractable problems in logic and life. He also periodically engages with the work of Newton, Fermat, Russell and others. The book shows Wittgenstein strongly battling against the limits of understanding and the bewitchment of institutional and linguistic customs. The reader is drawn in by Wittgenstein as he urges us to join him in his struggles to equip us with skills, so that we can embark on devising new pathways beyond confusion.

This collection of manuscripts was posted off by Wittgenstein to be considered for publication during World War 2, in October 1941. None of it was published and it remained hidden for over two generations. Upon its rediscovery, Professor Gibson was invited to research, prepare and edit the Archive to appear as this book, encouraged by Trinity College Cambridge and The Mathematical Association. Niamh O’Mahony joined him in co-editing and bringing this book to publication.

Professor Arthur Gibson graduated in Philosophy at Cambridge University, later acting as Director of Studies for a variety of its Colleges; he has been a Member of its Council of Senate, and a Proctor of the University; Arthur is a research member in the University's Department of Pure Mathematics & Mathematical Statistics, with interests in Foundations of Mathematics, Mathematical Philosophy, Wittgenstein, Metaphysics, Quantum Computing, infinity, AI, and mathematical physics of Cosmology – including dark energy; he is Chair of the Faculty Board of Cambridge University's Judge Business School; and for three years was Visiting Fellow at the Cambridge Law Faculty Lauterpacht Centre for International Law. He was the founding Chair of the European Maritime Security Council, continues to research for solutions to and advise on extreme international problems, and select areas of Public International Law jurisprudence for practical applications. His research books include topics in the above subjects, as well as volumes in metaphysics, ancient Near East languages and cultures, modern literatures, and poetry.

Niamh O'Mahony was a producer and writer at the BBC Russian Service. She is a graduate of the London School of Slavonic and East European Studies, UCL (Russian), and SOAS (Arabic), previously studying Arabic at Kuwait University. She was a PhD researcher in Early Russian Film at Trinity College Cambridge and the University's Department of Slavonic Studies. Niamh has lectured on the subject of Wittgenstein in Russia, and benefitted from a British Academy research award to do ethnographic research in Dagestan, former Soviet Union. She continues to have small roles in several films (Suffragette, Tulip Fever, Fantastic Beasts 2, Men in Black IV, Wonder Woman 2, etc). Earlier, she graduated from University College Dublin and practised in hospitals in Kuwait, Ireland and the UK.

“For the archivist it is always a cause for excitement when a new source for our understanding of the work of an important figure becomes available. This was the case when the Mathematical Association first loaned the Skinner manuscripts to Trinity and grew when the content of the material became apparent. The relationship between Wittgenstein and Skinner gives cause to respect their authority as a source for Wittgenstein's thought at a crucial time, when he was developing a number of familiar concepts that we associate with him today. It is the nature of Wittgenstein's work that it appears repeatedly to go over deceptively similar ground, providing us with a variety of examples, each of which illuminates a particular fresh aspect of a philosophical issue. This edition by Arthur Gibson and Niamh O'Mahony of the Witttgenstein/Skinner Archive will newly illuminate many aspects of Wittgenstein's thought, helping us to refine our understanding of it and of the world around us" (Jonathan Smith, Archivist, Trinity College Library, Cambridge, CB2 1TQ, UK)

“Wittgenstein had many friends with whom he engaged in philosophy, but Skinner was certainly one of the most important ones, an irreplaceable, loved companion, both in Cambridge and other places. Skinner was for example with Wittgenstein in his small house overlooking Eidsvatnet in Skjolden in late September 1937 when Wittgenstein wrote the paragraphs that later became famous as Appendix III of Remarks on the Foundations of Mathematics, Part I. And one year earlier, in August 1936, Wittgenstein brought important notes in Skinner’s hand with him to Skjolden, notes that he had dictated to Skinner and which later would be called the “Brown Book”. Also one of the finest and most accessible pieces of middle Wittgenstein philosophy of language, the “Pink Book” from 1933-34, has its origin in work done with Skinner. The Skinner Archives, published here for the first time, contain many such treasures, and the editors deserve our sincere thanks for making them known to the public and reminding us of the importance Skinner had for Wittgenstein, both in life and philosophy. After all, it was to Francis Skinner that Wittgenstein in 1932 had assigned (“zugeeignet”) his “Philosophische Bemerkungen”, and A. Gibson invites us to contemplate a thought-provoking possibility: What if Francis Skinner had not died early and become heir and editor of Wittgenstein?" (Professor Alois Pichler, Director of the Wittgenstein Archives at the University of Bergen)

“The 1946 discovery of the Dead Sea Scrolls provided a completely unexpected surprise for Biblical scholars.  In 2002 the UK Mathematical Association announced a previously unknown and unsuspected trove of papers by Wittgenstein’s dear friend Francis Skinner recording dictations by Wittgenstein from the mid-1930s.  These dictations, not unlike the Dead Sea Scrolls, cast a new and valuable perspective, in this case on Wittgenstein’s changing views about a wide range of philosophical and mathematical topics.  This publication of those dictations, meticulously and lovingly edited by Gibson and O’Mahony, has been more than a decade in the making.  The book will interest scholars of Wittgenstein’s transitional middle period, and those interested in how Wittgenstein developed his thoughts.  But the dictations also provide clear and useful statements of those thoughts, often more so than his own handwriting.” (Professor James Klagge, Virginia Tech, USA)

“Seventy years after Wittgenstein's death, the publication of the Wittgenstein-Skinner manuscripts, meticulously edited by Arthur Gibson and Niamh O'Mahony, will be one of the most exciting scholarly events in 2021. This book covers a wide range of topics not found elsewhere. It is definitely a must-read for Wittgensteinian philosophers and mathematicians." (Nuno Venturinha, Nova University of Lisbon)

“Gibson's presentation of the Wittgenstein-Skinner papers deepens and extends our understanding of Wittgenstein's philosophical development. Especially noteworthy is the first publication here of Wittgenstein’s hitherto unknown "Pink Book", part of it presented as a demonstration that Wittgenstein significantly influenced Alan Turing's composition of his seminal 'OnComputable Numbers'. (Professor Juliet Floyd, Boston University). In 1956 Basil Blackwell published a book called "Remarks on the Foundations of Mathematics". The name Ludwig Wittgenstein appears as its author, but in fact the book is an edition produced out of Wittgenstein's /Nachlass /by his literary heirs, Rush Rhees, G.E.M Anscombe and Georg Henrik von Wright. The 1956 volume, has served the scholarly world as one of its most important gateways to the study of Wittgenstein's later work. Nevertheless, its status remains controversial: In what sense is it a work by Wittgenstein? Can we get a correct view of Wittgenstein's thinking if we see him as working on the philosophy of mathematics, or on any other philosophical subject, as separable from his larger endeavour? The richness and unique character of the material presented here by Arthur Gibson and Niamh Ann O'Mahony will shed new light on issues which lie at the core of contemporary debates in the philosophy of logic and mathematics. They will also be a invaluable resource to the study of Wittgenstein's philosophical persona. No scholar or student with a serious interest in the question: What philosophy in our times can be?, And what it perhaps would have to be?, should ignore this book." (Professor Thomas Wallgren, Director of the von Wright and Wittgenstein Archives University of Helsinki)