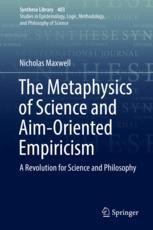 The Metaphysics of Science and Aim-Oriented Empiricism

A Revolution for Science and Philosophy

This book gives an account of work that I have done over a period of decades that sets out to solve two fundamental problems of philosophy: the mind-body problem and the problem of induction.  Remarkably, these revolutionary contributions to philosophy turn out to have dramatic implications for a wide range of issues outside philosophy itself, most notably for the capacity of humanity to resolve current grave global problems and make progress towards a better, wiser world.

A key element of the proposed solution to the second problem is that physics, in persistently accepting unified theories only, thereby makes a substantial metaphysical assumption about the universe: it is such that a unified pattern of physical law runs through all phenomena.  We need a new conception, and kind, of physics that acknowledges, and actively seeks to improve, metaphysical presuppositions inherent in the methods of physics.  The problematic aims and methods of physics need to be improved as physics proceeds.

These are the ideas that have fruitful implications, I set out to show, for a wide range of issues: for philosophy itself, for physics, for natural science more generally, for the social sciences, for education, for the academic enterprise as a whole and, most important of all, for the capacity of humanity to learn how to solve the grave global problems that menace our future, and thus make progress to a better, wiser world.  It is not just science that has problematic aims; in life too our aims, whether personal, social or institutional, are all too often profoundly problematic, and in urgent need of improvement.  We need a new kind of academic enterprise which helps humanity put aims-and-methods improving meta-methods into practice in personal and social life, so that we may come to do better at achieving what is of value in life, and make progress towards a saner, wiser world.

This body of work of mine has met with critical acclaim.  Despite that, astonishingly, it has been ignored by mainstream philosophy.  In the book I discuss the recent work of over 100 philosophers on the mind-body problem and the metaphysics of science, and show that my earlier, highly relevant work on these issues is universally ignored, the quality of subsequent work suffering as a result.

My hope, in publishing this book, is that my fellow philosophers will come to appreciate the intellectual value of my proposed solutions to the mind-body problem and the problem of induction, and will, as a result, join with me in attempting to convince our fellow academics that we need to bring about an intellectual/institutional revolution in academic inquiry so that it takes up its proper task of helping humanity learn how to solve problems of living, including global problems, and make progress towards as good, as wise and enlightened a world as possible.

Dr. Nicholas Maxwell - I have devoted much of my working life to arguing that we need to bring about a revolution in academia so that it seeks and promotes wisdom and does not just acquire knowledge. I have published twelve books on this theme: What’s Wrong With Science? (Bran's Head Books, 1976), From Knowledge to Wisdom (Blackwell, 1984), The Comprehensibility of the Universe (Oxford University Press, 1998), The Human World in the Physical Universe (Rowman and Littlefield, 2001), Is Science Neurotic? (Imperial College Press, 2004), Cutting God in Half - And Putting the Pieces Together Again (Pentire Press, 2010, How Universities Can Help Create a Wiser World: The Urgent Need for an Academic Revolution (Imprint Academic, 2014), Global Philosophy: What Philosophy Ought to Be (Imprint Academic, 2014), Two Great Problems of Learning: Science and Civilization (Rounded Globe, 2016), a free ebook available online, In Praise of Natural Philosophy: A Revolution for Thought and Life (McGill-Queen's University Press, 2017), Understanding Scientific Progress: Aim-Oriented Empiricism (Paragon House, 2017), and Karl Popper, Science and Enlightenment (UCL Press, 2017). I have also published many papers on this theme and on such diverse subjects as scientific method, the rationality of science, the philosophy of the natural and social sciences, the humanities, quantum theory, causation, the mind-body problem, aesthetics, and moral philosophy. For a book about my work see L. McHenry, ed., Science and the Pursuit of Wisdom: Studies in the Philosophy of Nicholas Maxwell (Ontos Verlag, 2009). For nearly thirty years I taught philosophy of science at University College London, where I am now Emeritus Reader. In 2003 I founded Friends of Wisdom, an international group of academics and educationalists concerned that universities should seek wisdom and not just acquire knowledge (see http://www.ucl.ac.uk/friends-of-wisdom). I have appeared on BBC Radio 4 "Start the Week", and on Canadian Broadcasting Corporation's  "Ideas" Programme. I have lectured in Universities and at Conferences all over the UK, in Europe, USA, Canada, and Taiwan. For more about my work see http://www.ucl.ac.uk/from-knowledge-to-wisdom. 'Arguing for Wisdom in the University', a brief intellectual autobiography published in 2012, and many other articles are available online at  http://discovery.ucl.ac.uk/view/people/ANMAX22.date.html.

“Maxwell's views deserve more attention and his contributions should be recognized by philosophical community. Overall, I recommend the book to anyone interested in the recent debates in the metaphysics of science and Maxwell's take on these issues.” (Ali Barzegar, Metapsychology Online Reviews, Vol. 23 (39), September 24, 2019)