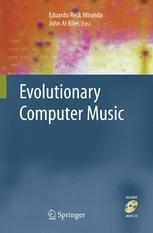 The evolutionary computation approach to music is an exciting new development for composers and musicologists alike. For composers, it provides an innovative and natural means for generating musical ideas from a specifiable set of primitive components and processes. For musicologists, these techniques are used to model the cultural transmission and change of a population's body of musical ideas over time. In both cases, musical evolution can be guided by a variety of constraints and tendencies built into the system, such as realistic psychological factors that influence the way music is expressed, experienced, learned, stored, modified, and passed on among individuals.

This book discusses not only the applications of evolutionary computation to music, but also the tools needed to create and study such systems. These tools are drawn in part from research into the origins and evolution of biological organisms, ecologies, and cultural systems on the one hand, and from computer simulation methodologies on the other. They can be combined to create surrogate artificial worlds populated by interacting simulated organisms in which complex musical experiments can be performed that would otherwise be impossible.

This authoritative book, with contributions from experts from around the globe, demonstrates that evolutionary systems can be used to create and to study musical compositions and cultures in ways that have never before been achieved.

Al Biles is a Professor and the Undergraduate Program Coordinator in the Department of Information Technology at the Rochester Institute of Technology in Rochester, New York. Between performances with GenJam over the last thirteen years, he has been active in helping establish information technology as a recognized academic discipline.

Al Biles has been applying evolutionary computation to music since 1993, when he built the first of many versions of GenJam, the Genetic Jammer. Since that time he and GenJam have performed around the world together, and Al has watched the field of evolutionary computer music emerge as a fascinating creative enterprise. Al is Professor and Undergraduate Program Coordinator in the Department of Information Technology at the Rochester Institute of Technology.

"Evolutionary computation currently plays a dual role in the analysis and development of musical compositions and ideas. … help musicologists understand the transformation of musical theory and the adaptation of musical components over time. … This book investigates not only the applications of evolutionary computation to music, but also the components needed to compose musical pieces and the systems that integrate these technologies. … this book is a welcome source of information." (R. Goldberg, ACM Computing Reviews, Vol. 49 (8), August, 2008)