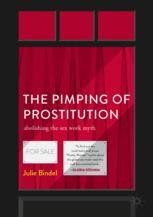 The Pimping of Prostitution

This book examines one of the most contested issues facing feminists, human rights activists and governments around the globe – the international sex trade. For decades, the liberal left has been conflicted as to whether pro-prostitution activists or abolitionists hold the correct view, and debates are ongoing as to who holds the key to the solutions facing the women and girls involved.

Over the course of two years, Bindel conducted 250 interviews in almost 40 countries, cities and states, traveling around Europe, Asia, North America, Australia, New Zealand, and East and South Africa. Visiting legal brothels all around the world, Bindel got to know pimps, pornographers, survivors of the sex trade, and the women being sold by men classed as ‘business entrepreneurs’. Whilst meeting feminist abolitionists, pro-prostitution campaigners, police and government officials, and the men who drive the demand, Bindel uncovered the lies, mythology and criminal activity that shroud this global trade, and suggests here a way forward for the women seeking to abolish the oldest oppression. Informed by the lived human experience of those interviewed, this book will be of great interest to feminists, students, criminal justice advocates, criminologists and human rights activists.

Julie Bindel is a renowned investigative journalist, and has written extensively on religious fundamentalism, violence against women, the international surrogacy trade, mail order brides, trafficking, and unsolved murders. She writes regularly for The Guardian, New Statesman, Truthdig and Standpoint Magazine, and frequently appears on the BBC and Sky News. She was Visiting Journalist at Brunel University, UK (2013 - 2014) and is now on the advisory board for www.byline.com.

“Julie Bindel shatters the myths, misconceptions and outright lies about the buying and selling of women’s bodies for sex. Her research into this devastating human rights violation against women and girls worldwide is powerful, profound and most important of all, irrefutable. It is the most thorough analysis of prostitution I have ever read!” (Victor Malarek, author of The Natashas: Inside the Global Sex Trade, and The Johns, Sex for Sale and the Men who Buy it)

“Bold, brilliant and brave. This is Julie Bindel at her best, demolishing the myths around prostitution and asking us to listen to survivors, the women and men who know the ugly reality first-hand.” (Joan Smith, author of Misogynies)

“Julie Bindel knows violence against women when she sees it. In this amazing investigative book, she manages to break through the mist and exposes the realities of how the sex trade actually works - and who it benefits.” (Nimco Ali, activist and writer)

“This book is comprehensive, authoritative, personally revealing, and a clear headed rage against a tide of modern double think. It will help feminism untangle itself from all the knots of faux progressiveness about prostitution, which is repackaging sexual abuse as empowerment. Bindel is a fearless, uncompromising voice who deserves to be universally heard.” (Janice Turner, Times Newspaper columnist)

“A profoundly impressive piece of reporting and polemic into a commercial industry. You may love Bindel’s work, you may profoundly disagree with it. But it will never leave you indifferent, and it will always make you question, which is why there should be more of it.” (Rose George, Author and journalist)

“For decades, Julie Bindel’s journalism has helped us see the pathology of patriarchy. This brave new book tells the stories not only of the incredible women who have survived prostitution but the men who choose to buy and sell women’s bodies. Bindel peels away the liberal veneer from the pro-prostitution lobby and its academic supporters to show how a feminist analysis of the sex trade is essential to give meaning to the culture’s claim to support ‘human rights.’ With the voices of prostitution survivors at the core of the book, Bindel’s reporting provides the context to understand the routine abuse in the sexual-exploitation industries.” (Robert Jensen, Professor, University of Texas at Austin, School of Journalism, Author of The End of Patriarchy: Radical Feminism for Men)

“The rigour of Julie Bindel’s investigative journalism into a global multi-billion dollar industry that operates mostly in the shadows and supported by international crime syndicates, major multinationals, and the most powerful governments in the world. The depth of her courage in being willing to not just call out every group who uncritically promote this sex trade myth, but also putting her own personal safety at risk in order to bring the truths of the sex trade to light. And most of all, the depth of her love for women: for the women in the sex trade who went through it; for those who still suffer within it; for those who might be yet be in it; and for all those – which is women as a whole – who are affected by it. This is feminism at its ruthlessly critical, morally principled, and passionate best.” (Dr Pala Molisa, academic, activist and writer)

”Julie Bindel has approached this issue with a scalpel in one hand and a hacksaw in the other, and she has made liberal use of both. The Pimping of Prostitution ruthlessly exposes the international pro-prostitution lobby across the full length of its inglorious spectrum of dishonesties, from subtle deliberate deceptions to outrageous outright lies. The reader learns about the culture of bullying that is rampant in academia, where students and scholars alike live out their studies and careers in an enforced silence where dissent on the sex trade status quo is rigidly policed and viciously punished. Students should hear the message contained – a clarion call for intellectual courage. Most importantly, this is a work that purposefully elevates the voices of those who have been systematically silenced. Julie Bindel has done us proud. This is a work of rock-solid resistance, from the no-bullshit school of feminism.” (Rachel Moran, prostitution and sex trafficking survivor, and author of Paid For: My Journey Through Prostitution)

“No one in Britain knows more than Julie Bindel about prostitution – the politics, the debates, the myths, the scale, and the damage to individuals and to the culture that sustains it. Every word in this long-awaited book is worth reading. It combines scholarship, activism, personal narratives and political analysis. It is a mighty challenge to the pessimism of 'the oldest profession' and above all it offers hope of a society free of sexism and sexual exploitation.” (Bea Campbell, writer, activist, and author of The End of Equality)

“Resolute, lucid and undeniable, The Pimping of Prostitution is a timely, steadfast rejection of prevailing pro sex-trade propaganda and a reminder that centring and elevating the experiences of the most vulnerable as well as exposing exploiters, profiteers and their useful idiots is the hallmark of great journalism. Bindel unmasks the plastic sloganeering doublespeak of empowerment, choice and the language designed to obscure and minimise the role of the sex-buyer in the violence that characterises the sex-trade. The Pimping of Prostitution is an essential bulwark against a dangerous and popular narrative that those responsible for violence against women and girls are not so much men who commit it, but the women who stand up against it. With The Pimping of Prostitution, Julie Bindel puts the responsibility back where it belongs.” (Tom Meagher, writer and activist)

“An excoriating response to those who say prostitution is inevitable, that it is work like any other, and that prostituted women need labour rights and state regulation, not abolition. Bindel exposes gender inequality at its most brutal and violent in this intelligent, well-researched and well-written critique. Agree or disagree, I've no doubt it will become a core text for the study of patriarchy and its consequences.” (Karon Monaghan QC, leading human rights and equality law practitioner)

“This book is persuasive, clear, revealing and very powerful. It brilliantly exposes the outright abuse and misogyny at the heart of a worldwide system in which men and boys control, buy, sell, rent and use women and girls. And it answers back to any apologist, male or female, who defends men's renting and use of women in the worldwide system of sexual exploitation.” (Bidisha, Writer, critic and broadcaster)

“This is a critically important book on a critically important subject by one of our most courageous and incisive social critics. Read it and understand that there is no human right to prostitute women and girls that prostitution is about power and profit, degradation, pain, fear and exploitation. Julie Bindel has made the argument: we have a duty to echo it. Essential reading.” (Dexter Dias QC, human rights lawyer and author of The Ten Types of Human)

“To find out the truth behind all those "Pretty Woman" myths about the global sex trade read this well documented book by Julie Bindel.” (Gloria Steinem, feminist, journalist and social and political activist)