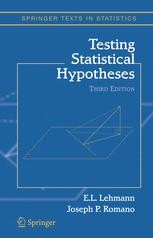 The third edition of Testing Statistical Hypotheses updates and expands upon the classic graduate text, emphasizing optimality theory for hypothesis testing and confidence sets. The principal additions include a rigorous treatment of large sample optimality, together with the requisite tools. In addition, an introduction to the theory of resampling methods such as the bootstrap is developed. The sections on multiple testing and goodness of fit testing are expanded. The text is suitable for Ph.D. students in statistics and includes over 300 new problems out of a total of more than 760.

Joseph P. Romano is Professor of Statistics at Stanford University. He is a recipient of a Presidential Young Investigator Award and a Fellow of the Institute of Mathematical Statistics. He has coauthored two other books, Subsampling with Dimitris Politis and Michael Wolf, and Counterexamples in Probability and Statistics with Andrew Siegel.

Joseph P. Romano is Professor of Statistics at Stanford University. He is a recipient of a Presidential Young Investigator Award and a Fellow of the Institute of Mathematical Statistics. He has coauthored two other books, Subsampling with Dimitris Politis and Michael Wolf, and Counterexamples in Probability and Statistics with Andrew Siegel.

"This new edition of the classic and fundamental text on the theory of testing hypotheses is an essential addition to the bookshelf of mathematical statisticians." Short Book Reviews of the International Statistical Institute,  December 2005

"What I like much about this book is its illustrative language and the numerous examples that make it easier to understand the complex matter presented. The comprehensible notation and the excellent structure further add to the readability of this book."Biometrics, March 2006

"The third edition of TSH retains much of the same focus as the second edition...The quality of the new material alone justifies the publication of a third edition to a book already well suited. As readers of the earlier editions have come to expect, TSH contains an enormous number of examples, problems, and ideas. The writing and presentation are excellent." Journal of the American Statistical Association, June 2006

"This is the third edition of a famous book which was first published in 1959. The first rigorous exposition to the theory of testing for any student of statistics has been invariably through this masterpiece. … Needless to say, this book continues to be the benchmark in the rigorous treatment of testing of hypothesis. The new chapters on the asymptotic behaviour of most of the popular tests is a true value addition." (Arup Bose, Sankhya, Vol. 67 (4), 2005)

"This is a revised and expanded version of the well-known second edition from 1986 … . The exposition is clear and sufficiently rigorous. … With this edition ‘Testing Statistical Hypothesis’ will undoubtedly continue to be the standard graduate level textbook on statistical testing." (R. Schlittgen, Zentralblatt MATH, Vol. 1076, 2006)

"This monograph under review is the third edition … of Erich L. Lehmann’s classical graduate text on ‘Testing statistical hypotheses’. … the second edition from 1986 has comprehensively been reorganized … . Additional insight into the historical background and recent developments is given … . More than 1,000 original references are provided. … an excellent and demanding treatment of modern statistical test theory. There is no doubt that it remains and will even more be used as a standard monograph … ." (J. Steinebach, Metrika, Vol. 64, 2006)