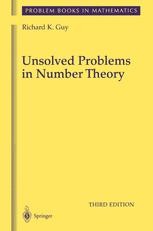 Mathematics is kept alive by the appearance of new unsolved problems, problems posed from within mathematics itself, and also from the increasing number of disciplines where mathematics is applied. This book provides a steady supply of easily understood, if not easily solved, problems which can be considered in varying depths by mathematicians at all levels of mathematical maturity.

For this new edition, the author has included new problems on symmetric and asymmetric primes, sums of higher powers, Diophantine m-tuples, and Conway’s RATS and palindromes. The author has also included a useful new feature at the end of several of the sections: lists of references to OEIS, Neil Sloane’s Online Encyclopedia of Integer Sequences.

"…many talented young mathematicians will write their first papers starting out from problems found in this book."

"This is the third edition of Richard Guy’s well-known problem book on number theory … . The earlier editions have served well in providing beginners as well as seasoned researchers in number theory with a good supply of problems. … many of the problems from earlier editions have been expanded with more up-to-date comments and remarks. … There is little doubt that a new generation of talented young mathematicians will make very good use of this book … ." (P. Shiu, The Mathematical Gazette, Vol. 89 (516), 2005)

"The earlier editions of this book are among the most-opened books on the shelves of many practicing number theorists. The descriptions of state-of-the-art results on every topic and the extensive bibliographies in each section provide valuable ports of entry to the vast literature. A new and promising addition to this third edition is the inclusion of frequent references to entries in the Online encyclopedia of integer sequences at the end of each topic." (Greg Martin, Mathematical Reviews, Issue 2005 h)