The change in behaviour of natural nanoparticles, called lipoproteins, under pressure could provide new insights to better understand the genesis of high cholesterol and atherosclerosis 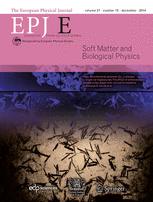 Understanding common diseases sometimes boils down to grasping some of their basic mechanisms. For instance, a specific kind of natural nanoparticles, called low-density lipoproteins (LDL), are fascinating scientists because their modification plays a key role in people affected by high cholesterol. They are also known for their role in the formation of atherosclerosis. Judith Peters from the University Grenoble Alpes and the Institute Laue Langevin, Grenoble, France and colleagues from the Medical University of Graz, Austria, mimicked variations of LDL found in people affected by such diseases. They then compared their responses to temperature variations and increased pressure with those of lipoproteins found in healthy people. Their findings, recently published in EPJ E, show that the LDL from healthy people behaved differently when subjected to high pressure compared to LDL affected by the common diseases studied.

To study the differences between native LDL particles found in healthy people and their modified forms, which mimic the respective diseases, Peters and colleagues relied on two standard methods. They used a method called calorimetry to determine the transition temperatures between different LDL phases. At the same time they used another method, called elastic incoherent neutron scattering, while applying pressure to shed light on the molecular motions within the particles: a novel approach, since neutron experiments are rarely combined with high pressures, due to the technical difficulties involved.

The authors found that when LDL particles were subjected to variations in temperature, their behaviour was very similar. In fact, a rise in temperature increased their dynamics at the molecular level. However, when the authors increased the pressure on LDL particles, they found that their flexibility actually increased under pressure in healthy people. By contrast, their flexibility clearly decreased for the two modified forms mimicking disease states. This difference, the authors believe, could stem from a slightly different lipid composition.