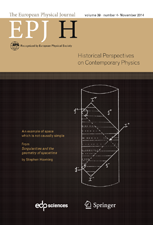 Einstein’s 1915 theory of gravitation, also known as General Relativity, is now considered one of the pillars of modern physics. It contributes to our understanding of cosmology and of fundamental interactions between particles. But that was not always the case. Between the mid-1920s and the mid-1950s, General Relativity underwent a period of stagnation, during which the theory was mostly considered as a stepping-stone for a superior theory. In a special issue of EPJ H just published, historians of science and physicists actively working on General Relativity and closely related fields share their views on the process, during the post-World War II era, in particular, which saw the “Renaissance” of General Relativity, following progressive transformation of the theory into a bona fidae physics theory.

In this special issue, new insights into the historical process leading to this renaissance point to the extension of the foundation of the original theory, ultimately leading to a global transformation in its character. Contributions from several experts reveals that the theory of 1915 was insufficient to reach firm conclusions without being complemented by intuitions drawn from the resources of pre-relativistic physics. Or, in the case of cosmology, the theory needed to be complemented by philosophical considerations that were hardly generalizable to help solve more mundane problems.

As physicist Pascual Jordan puts it, there was a “mismatch between the simplicity of the physical and epistemological foundations and the annoying complexity of the corresponding thicket of formulae.”

A number of contributions in this special issue also explain how the theory underwent a period of successive controversies, leading by the 1960s, to the renaissance of the theory. Subsequently, it became in the 1970s, an important, empirically well-tested branch of theoretical physics related to the new, successful sub-discipline of relativistic astrophysics.