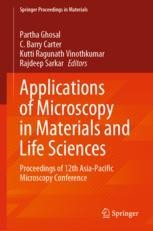 Applications of Microscopy in Materials and Life Sciences

This book comprises the proceedings of the 12th International Conference on Asia-Pacific Microscopy Conference (APMC12) focusing on emerging opportunities and challenges in the field of materials sciences, life sciences and microscopy techniques. The contents of this volume include papers on aberration corrected TEM & STEM, SEM – FIB, ion beam microscopy, electron diffraction & crystallography, microscopy and imaging associated with bio-nanotechnology, medical applications, host-pathogen interaction, etc. This book will be beneficial to researchers, educators, and practitioners alike.

Dr. Partha Ghosal is a senior Scientist G in DMRL, Hyderabad and is heading the Electron Microscopy Group. He received his Ph.D. from Indian Institute of Technology (IIT-BHU), Varanasi in the field of Metallurgical Engineering in 1996 and worked on the effect of crystal defects in the diffraction theory for ordered HCP alloys. He spent one year as DAAD visiting scientist in TU Clausthal, Germany to work on EBSD techniques. Currently, he is working in the area of advanced characterization techniques, along with SEM, EBSD, FIB, TEM, HRTEM and Raman-AFM systems. His current interests include in-situ mechanical testing and heating experiments of nano and advanced materials inside electron microscopes and advanced Raman analysis for these materials. Extensive electron microscopic works on Ti-based alloys, W-based alloys and nano-composites are also in the scope of his interest. He is involved in establishing an advanced materials characterization centre for the country at DRDO. He has around 146 international papers, over 100 invited presentations and 3 patents to his credit. He is a fellow of EMSI with 25 years of research experience. He is member of Electron Crystallography (IUCr) from India. He is reviewer of 11 reputed international journals and life member of professional national bodies such as IIM, MRSI, EMSI and MSI.

Dr. C. Barry Carter is a Research Professor and Emeritus Professor at the University of Connecticut, USA. He holds a B.A., M.A. and Sc.D. from Cambridge University, an M.Sc. from Imperial College, London, and a D.Phil. from Oxford University. After 6 years in Oxford, he moved to Cornell where he spent 14 years leaving as a full Professor. He spent 16 years as Professor and the 3M Endowed Multidisciplinary Chair in the Department of Chemical Engineering and Materials Science at the University of Minnesota and 5 years as Head of UConn’s Department of Chemical, Materials and Biomolecular Engineering. He is a CINT Distinguished Affiliate Scientist at Sandia National Lab. He had earlier held visiting positions at LANL, Chalmers, NIMS in Tsukuba, Bristol University, Max Planck Institute in Stuttgart, the Institute for Physical Chemistry in Hanover and the Ernst Ruska Center in Jülich. He has been awarded a Guggenheim Fellowship and the Alexander von Humboldt Senior Award. He is the Editor-in-Chief of the Journal of Materials Science, a journal cited more than 55,099 times in 2019 and 2 million downloads in 2020. His research interests focus on the application of different microscopies to understand how the structure and chemistry of materials determine their properties and behavior. He works on several projects including a study of the deformation of Ta and its growth in thin-film form, electrospinning of TiO2, lithiation of nanomaterials, especially Sn whiskers and MoS2, for battery applications, and how the crystallization dynamics control the properties of phase-change materials.

Dr. Rajdeep Sarkar is a scientist at the Defence Metallurgical Research Laboratory (DMRL), Hyderabad, India. He received his Bachelor of Engineering (Metallurgy) degree from the National Institute of Technology (NIT), Durgapur in 2003. He completed his M.Tech. and Ph.D. degree in Metallurgical and Materials Engineering from Indian Institute of Technology (IIT), Kharagpur in 2005 and 2015, respectively. His area of specialization includes structural and sub-structural characterization (using TEM and related techniques) of materials, like titanium alloys, super alloys, tungsten alloys and nano-materials, along with structure-property correlation. He is life member of the Indian Institute of Metals (IIM), Electron Microscope Society of India (EMSI) and Materials Research Society of India (MRSI). He has currently a credential of 64 publications in peer-reviewed international journals.

Dr. K. R. Vinothkumar is a Structural Biologist and Biochemist based at National Centre for Biological Sciences, Bengaluru, India. He pursued his Ph.D. in Membrane protein structural biology from Max-Planck Institute of Biophysics, Frankfurt. Dr. Vinothkumar subsequently joined the Laboratory of Molecular Biology, Cambridge, where he was associated with Dr. Richard Henderson, a pioneer in the field of electron cryomicroscopy. In 2017, he joined National Centre for Biological Sciences, Bengaluru, where his lab research interests spans from macromolecular complexes in signalling to enzymes involved in bioremediation. In addition, Dr. Vinothkumar also directs the National CryoEM facility housed in the Institute of Stem Cell Science and Regenerative Medicine, which along with NCBS is part of the Bangalore Life Science campus.