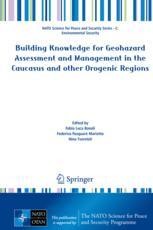 This volume is aimed at providing a comprehensive overview of the state of art of research related to geo-related hazards in the Caucasus and other orogenic regions; it is also devoted to shedding light on a broad array of geological phenomena as well as discussing innovative tools and strategies for geohazard assessment. Additional emphasis is placed on preventive and mitigation measures, which might be helpful in tackling seismic, volcanic and landslide risks affecting major lifelines and infrastructures. The innovative, multidisciplinary methodologies illustrated in this volume may be successfully applied to other orogenic regions across the globe. The book features major scientific contributions from experts working on different Earth Science topics, such as seismology, structural geology, applied geology and volcanology. Its chapters describe a wide gamut of cutting-edge research methodologies and are thus intended to be read and shared by the worldwide Earth Science community. In particular, the readers will have a chance to gain a thorough knowledge of a number of key geological features that can be observed across both the Greater and Lesser Caucasus. Moreover, the volume provides a thorough description of the techniques employed to assess seismic hazard in major cities - such as microzonation - and an overview of the efforts taken to monitor and prevent seismic and landslide hazard posed to vital energy infrastructures in the Caucasus region.

Fabio L. Bonali is Researcher at the University of Milan-Bicocca (Milan, Italy), where he conducts his research on “Seismic and Volcanic Hazard”, “Active tectonics” and “Volcano-tectonics”. He achieved his PhD in Earth Sciences in 2014 and, during his career so far, he has specialized in field and drone surveys, numerical and physically-scaled modelling applied to research performed in Italy, Iceland, South America and Asia.

His research resulted in 39 scientific papers in international, peer-reviewed journals, on active tectonics and surface faulting, the relations between tectonics and volcanism, and seismology. Since 2007, he has participated in 10 international projects; since 2017 he has led three international projects supported by the North Atlantic Treaty Organization (NATO) and the European Space Agency. He received three international awards in 2018: the Flinn-Hart Award by the International Lithosphere Program Bureau; an award by the Emergency Management Agency (LEPL) – Ministry of Internal Affairs of Georgia, for his activity dedicated to the improvement of Seismic Hazard knowledge in the Caucasus; another prize was awarded to him by the European Geosciences Union (EGU) through the EGU Public Engagement Grants, in recognition of his organizing international, geo-related dissemination events, using immersive virtual reality and extending its use to people affected by motor disabilities. He is also involved in outreach activity on geo-related topics, through the social media, scientific blogs and university classes. Finally, he has organized several international dissemination events with ILP and EGU’s support, and under the aegis of the Italian Geological Society.

Federico Pasquaré Mariotto is Associate Professor at Insubria University (Como, Italy), where he teaches “Geohazard Communication” and “Geology of Volcanic Terrains”. He specialized in Science Journalism in the U.S. and spent five years working at the Italian Environmental Protection Agency in Rome, where his research was focused on environmental protection, geohazard mitigation and risk communication.

His current research deals with the relations between tectonics and volcanism in both active and extinct volcanic regions. Another focus is on Earth Science communication, on the use of museology for communicating Earth Sciences and on the study of media coverage of geo-related risks and disasters. He published 45 scientific papers in international, peer-reviewed journals, based on the structural-geological work he has carried out in several geological areas, such as Iceland, southern Italy, Argentina, Scotland, the Republic of Georgia, Armenia, the Azores, Mexico, Hawaii, Greece, the Philippines, Kyrgyzstan. With financial support provided by NATO, he led the international project titled “Volcanic hazards and countermeasures for Georgian section of Caspian pipelines (2007-2009)”; he also took part in two more NATO-funded projects, entitled “Geo-environmental security of the Toktogul hydroelectric power station region, central Asia (2008-2012)”, and “Security against geohazards at the major Enguri hydroelectric scheme in Georgia (2015-2018)”.

He has co-authored two books, respectively dealing with the structural geology of active tectonic areas and volcanic regions, and the communication of seismic, volcanic and climate risks. He is President of GeoSocial – Science & Media, a Switzerland-based, not-for-profit organization dedicated to raising public awareness of geo-related threats and climate hazards.

Nino Tsereteli is chief researcher and head of the sector of seismology, seismic hazard and disaster risks at the M. Nodia Institute of Geophysics of Ivane Javakhishvili Tbilisi State University (Tbilisi, Georgia). Her main research is focused on seismology, seismotectonics, seismic hazard and seismic risk assessment. She also worked, in the capacity of visiting scientist, at the Karlsruhe Institute of Technology (Institute of Geophysics), Germany; Imperial College of Science, Technology and Medicine, London, UK; Earth and Marine Sciences Institute, TUBITAK Marmara Research Center, Turkey. At the M. Nodia Institute of Geophysics, she developed the field of research centred on microzonation and earthquake engineering. She published 25 papers in international, peer-reviewed journals with a focus on earthquake, ground motion prediction equations, seismic sources, seismic hazard and risk, and multiple risk assessment. She has been involved in many international and national projects, and was Partner Country Director in the NATO Project G4934 – Science for Peace and Security Programme“Security against geohazards at the major Enguri hydroelectric scheme in Georgia”. She has also provided a relevant contribution to the improvement of seismic hazard knowledge, through the publication of “GeoInt: the first macroseismic intensity database for the Republic of Georgia”. She is ad-hoc professor at The Agricultural University of Georgia and at Ivane Javakhishvili Tbilisi State University, where she teaches “Earthquake engineering and seismic hazard” and “Seismology”.