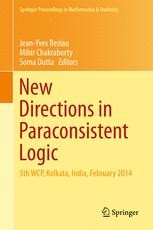 The present book discusses all aspects of paraconsistent logic, including the latest findings, and its various systems. It includes papers by leading international researchers, which address the subject in many different ways: development of abstract paraconsistent systems and new theorems about them; studies of the connections between these systems and other non-classical logics, such as non-monotonic, many-valued, relevant, paracomplete and fuzzy logics; philosophical interpretations of these constructions; and applications to other sciences, in particular quantum physics and mathematics. Reasoning with contradictions is the challenge of paraconsistent logic. The book will be of interest to graduate students and researchers working in mathematical logic, computer science, philosophical logic, linguistics and physics.

JEAN-YVES BEZIAU, former PhD student of Newton da Costa, is professor at the University of Brazil, Rio de Janeiro, and editor-in-chief of Logica Universalis (Springer’s journal). He has done research around the world—France, Brazil, Poland, Switzerland and California—and has launched two series of international events: UNILOG, World Congress and School on Universal Logic; SQUARE, World Congress on the Square of Opposition. He is the logic part editor of the Internet Encyclopedia of Philosophy, joint project with Enyclopyedia of Logic that he is editing.

SOMA DUTTA did her master and doctoral research at the Department of Pure Mathematics, University of Calcutta, India. Her doctoral research is about a theory of graded consequence, a field of study closely related to fuzzy logic, initiated by her PhD supervisor Mihir Kumar Chakraborty. Her research interests also include paraconsistent logics and generalized quantifiers. She has been associated with The Institute of Mathematical Sciences, Chennai, India, as a postdoctoral fellow. Presently, she has a fellowship of  European Research Consortium for Informatics and Mathematics (ERCIM) to pursue postdoctoral research at the Faculty of Mathematics, Informatics and Mechanics, University of Warsaw, Poland.