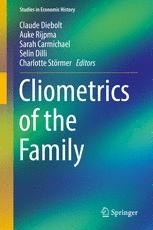 Cliometrics of the Family

This contributed volume applies cliometric methods to the study of family and households in order to derive global patterns and determine their impact on economic development. Family and households are a fundamental feature of societies and economies. They are found throughout history and are the place where key decisions on fertility, labour force participation, education, consumption are made. This is especially relevant for the position of women. The book gathers key insights from a variety of fields – economics, history, demography, anthropology, biology – to shed light on the relation between family organisation and the long-term process of economic development.

Claude Diebolt is a CNRS Research Professor of Economics at the University of Strasbourg. His research focuses on the cliometrics of growth and economic cycles. He is the founder and the editor in chief of the journal Cliometrica. He is also the coeditor of the Handbook of Cliometrics and was the organizer of the 8th World Congress of Cliometrics. Claude Diebolt is the founding President of the French Cliometric Association, a former Chair of the Board of Trustees of the Cliometric Society and the current President of the French Economic Association.

Auke Rijpma is an Assistant Professor and Post-Doctoral researcher in the Economic and Social History research group of Utrecht University. He is interested in quantitative methods, the measurement of wellbeing, public services, and the link between family organization and economic development.

Sarah Carmichael is an Assistant Professor and Post-Doctoral researcher in the Economic and Social History research group of Utrecht University. Her research interests lie in the exploration of the interaction between informal institutions and development outcomes and the historical measurement of gender inequality. She is particularly intrigued by ways to incorporate qualitative sources into quantitative analysis and the development of measures that capture cultural phenomena.

Selin Dilli is an Assistant Professor of Economics in the University College Fryslân and Post-Doctoral research fellow in the Economic and Social History research group of Utrecht University. She studies the evolution of informal and formal institutions and their consequences for development outcomes such as gender equality, democracy, economic growth, and entrepreneurship at a global level since the early 20th centuries.

Charlotte Störmer is a Post-Doctoral research fellow in the Economic and Social History Group of Utrecht University. She is an evolutionary biologist and her research interests are the variation and evolution of human life histories, considered from an interdisciplinary perspective.