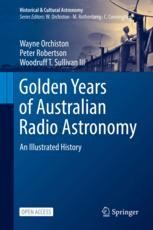 The evolution of Australian radio astronomy from 1945 to 1960 has been studied in detail by numerous historians of science in recent years. This Open Access book is the first to present an overview of this remarkable chapter in Australian science.

The book begins in the post-war period, as the Radiophysics Laboratory in Sydney switched from secret wartime research on radar to peacetime applications of this new technology. Next follows the detection of radio waves from space and the ensuing transformation of this fledgling science into the dominant research program at the Radiophysics Lab. Drawing from this history, the book shows how by 1960 the Radiophysics Lab had become the largest and most successful radio astronomy group in the world. The final chapter presents an overview of Australian radio astronomy from 1960 to the present day, as Australia prepares to co-host the multi-national, multi-billion-dollar Square Kilometre Array.

Nearly 300 high-quality images complement the text, drawn from a wide range of sources including the extensive collection held by the CSIRO Radio Astronomy Image Archive. The book will be an essential reference for readers interested in the scientific and cultural development of radio astronomy.

This book is published open access under a CC BY 4.0 license.

Prof Wayne Orchiston works at the National Astronomical Research Institute of Thailand and is an Adjunct Professor in the Astrophysics Group at the University of Southern Queensland (USQ) in Toowoomba, Australia.  Previously, he worked in academic and government astronomy posts in Australia and New Zealand.  Wayne has a special interest in the history of astronomy, and through Western Sydney University, James Cook University (Townsville, Australia) and USQ has supervised the research of more than 30 PhD and Masters theses.  He has published papers about early radio astronomy (in Australia, France, India, Japan, New Zealand and the USA); the history of cometary astronomy and meteoritics; historic transits of Venus and solar eclipses; early developments in astrophysics; historic telescopes and observatories; and ethnoastronomy.  His recent books include Eclipses, Transits and Comets of the Nineteenth Century: How America’s Perception of the Sky Changed (Springer, 2015, co-authored by Stella Cottam), Exploring the History of New Zealand Astronomy: Trials, Tribulations, Telescopes and Transits (Springer, 2016), John Tebbutt: Rebuilding and Strengthening the Foundations of Australian Astronomy (Springer, 2017) and The Emergence of Astrophysics in Asia: Opening a New Window on the Universe (Springer, 2017, co-edited by Tsuko Nakamura).  Currently Wayne is the President of IAU Commission C3 (History of Astronomy), and in 2003 he founded the IAU Working Group on Historic Radio Astronomy.  In 1998 he and John Perdrix launched the Journal of Astronomical History and Heritage, and he is the current Editor.  Wayne is also a Co-Editor of Springer’s Historical & Cultural Astronomy Series. In 2013, the IAU named minor planet 48471 Orchiston after him.

Dr Peter Robertson is an honorary research fellow in the School of Physics, University of Melbourne.  He spent most of his career as managing editor of the Australian Journal of Physics, published by CSIRO Australia and the Australian Academy of Science.  His first contribution to the history of astronomy was the book Beyond Southern Skies – Radio Astronomy and the Parkes Telescope (Cambridge University Press, 1992).  Since his retirement, Peter has had more time to pursue his interest in the history of astronomy.  He recently completed a PhD through the University of Southern Queensland on the discovery of discrete radio sources in the late 1940s by the Radiophysics Lab in Sydney.  His most recent publication is the biography Radio Astronomer – John Bolton and a New Window on the Universe (NewSouth Publishing, 2017).  Peter is an Associate Editor of the Journal of Astronomical History and Heritage and recently became a member of the IAU Working Group on Historic Radio Astronomy.

Prof Woodruff Sullivan has been on the faculty of the University of Washington in Seattle for over forty years and is now Professor (Emeritus) of Astronomy and History of Science (Adjunct). His interests are in radio astronomy, astrobiology (in particular the search for extraterrestrial intelligence), and the history of astronomy. His PhD dissertation, under the supervision of Australian radio astronomy pioneer Frank Kerr, was titled ‘Microwave Radiation of Water Vapor in Galactic Sources’. Together with John Baross he produced the graduate textbook Planets and Life: The Emerging Science of Astrobiology (2007). History of astronomy research has been on the twentieth century, in particular the development of early radio astronomy (books include Cosmic Noise: A History of Early Radio Astronomy, 2009; The Early Years of Radio Astronomy: Reflections Fifty Years after Jansky’s Discovery, 1984; and Classics in Radio Astronomy, 1982). His current long-term project is a biography of the great 18th-century astronomer William Herschel. He received the Leroy Doggett Prize of the American Astronomical Society for his career contributions to the history of astronomy. Sundials are a passion of his.