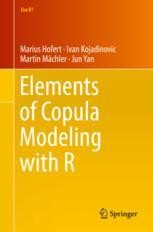 Elements of Copula Modeling with R

This book introduces the main theoretical findings related to copulas and shows how statistical modeling of multivariate continuous distributions using copulas can be carried out in the R statistical environment with the package copula (among others).

Copulas are multivariate distribution functions with standard uniform univariate margins. They are increasingly applied to modeling dependence among random variables in fields such as risk management, actuarial science, insurance, finance, engineering, hydrology, climatology, and meteorology, to name a few.

In the spirit of the Use R! series, each chapter combines key theoretical definitions or results with illustrations in R. Aimed at statisticians, actuaries, risk managers, engineers and environmental scientists wanting to learn about the theory and practice of copula modeling using R without an overwhelming amount of mathematics, the book can also be used for teaching a course on copula modeling.

Martin Mächler is a lecturer and senior scientist at the ETH Zurich, Switzerland. He received his Ph.D. in mathematics from the ETH in 1989, and spent his postdoc years at the University of Washington, Seattle and Bell Communications Research (Bellcore), before joining the Seminar für Statistik at the ETH as lecturer in 1991. He became involved with R in 1995, was a founding member of the R core team in 1997 and has since been active in the development of R. His research interests include nonparametric curve estimation, numerical approximation, clustering, robust statistics, sparse matrices and statistical computing in general. He has been the maintainer of circa 20 CRAN R packages, including the "recommended" packages Matrix and cluster.

Jun Yan is a professor of statistics at the University of Connecticut, USA. He received his Ph.D. in statistics from University of Wisconsin - Madison, USA in 2003. He was an assistant professor at the University of Iowa, USA before joining UConn in 2007. His research interests include survival analysis, clustered data analysis, multivariate dependence, spatial extremes, and statistical computing. Actively involved in collaborative research in public health and environmental sciences, he has a special interest in making advanced statistical methods widely accessible via open source software.