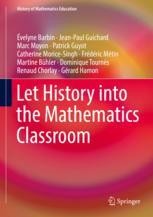 Let History into the Mathematics Classroom

This book brings together 10 experiments which introduce historical perspectives into mathematics classrooms for 11 to 18-year-olds. The authors suggest that students should not only read ancient texts, but also should construct, draw and manipulate. The different chapters refer to ancient Greek, Indian, Chinese and Arabic mathematics as well as to contemporary mathematics. Students are introduced to well-known mathematicians—such as Gottfried Leibniz and Leonard Euler—as well as to less famous practitioners and engineers. Always, there is the attempt to associate the experiments with their scientific and cultural contexts.

One of the main values of history is to show that the notions and concepts we teach were invented to solve problems. The different chapters of this collection all have, as their starting points, historic problems—mathematical or not. These are problems of exchanging and sharing, of dividing figures and volumes as well as engineers’ problems, calculations, equations and congruence. The mathematical reasoning which accompanies these actions is illustrated by the use of drawings, folding, graphical constructions and the production of machines.
Show all
About the authors

Évelyne Barbin is full professor of epistemology and history of sciences at the University of Nantes (France), she is member of the Laboratory of Mathematics Jean Leray (LMJL, UMR 6629) and of the Institute for Research in Mathematics Education (IREM). Her research concerns history of mathematics, history of mathematics teaching and relations between history and teaching of mathematic. As convenor of the IREM National Committee “Epistemology and History of Mathematics”, she organised thirty colloquia and summer universities. She edited more than 25 books. Since 1980, she is member of the International HPM Group and she was chair from 2008 to 2012. Her recent works concern the history of descriptive geometry.

“This book has many strengths: the broad and engaging range of topics, the clear structure of the lessons and the detailed presentation of the history with a good use of images. To teachers, in particular, this book is certainly a compelling call to value the importance of history in the maths classroom but there is much of interest to any mathematician here.” (Sean Springer, London Mathematical Society Newsletter, newsletter.lms.ac.uk, Issue 478, September, 2018)

“There is a lot of material here that might be of interest to people who are interested in history and/or pedagogy. It’s certainly a book that is worth a look, even by people who teach older students in college.” (Mark Hunacek, MAA Reviews, December, 2017)