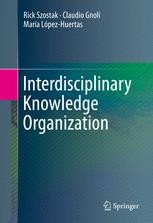 -This novel approach is entirely feasible. Various concerns that might be raised can each be addressed. The broad outlines of what a new classification would look like are developed.

-This new approach might serve as a complement to or a substitute for existing classification systems.

-Domain analysis can and should be employed in the pursuit of a general classification. This will be particularly important with respect to interdisciplinary domains.

-Though the impetus for this novel approach comes from interdisciplinarity, it is also better suited to the needs of the Semantic Web, and a digital environment more generally.

Though the primary focus of the book is on classification systems, most chapters also address how the analysis could be extended to thesauri and ontologies. The possibility of a universal thesaurus is explored. The classification proposed has many of the advantages sought in ontologies for the Semantic Web. The book is therefore of interest to scholars working in these areas as well.