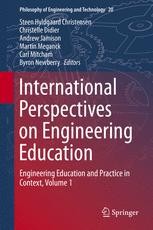 This inclusive cross-cultural study rethinks the nexus between engineering education and context. In so doing the book offers a reflection on contextual boundaries with an overall boundary crossing ambition and juxtaposes important cases of critical participation within engineering education with sophisticated scholarly reflection on both opportunities and discontents.

Using context as “bridge” this book confronts engineering education head on. Contending engineering ideologies and corresponding views on context are juxtaposed with contending discourses of reform. The uniqueness of the book is that it brings together scholars from the humanities, the social sciences and engineering from Europe – both East and West –  with the United States, China, Brazil, India and Australia.

Steen Hyldgaard Christensen M.A. in Scandinavian Language and Literature and the History of Ideas, Aarhus University. Ph.D. in Educational Studies, Aalborg University. Senior lecturer at Aarhus University, School of Business and Social Sciences, Herning, Denmark, until 2014. From 2014, adjunct associate professor at Aalborg University, Denmark. He has initiated six big international inter- and metadisciplinary research projects on engineering including PROCEED and coordinated fi ve of them. He has acted in roles of editor-in-chief and coauthor of four books: Profession, Culture, and Communication: An Interdisciplinary Challenge to Business and Engineering (Institute of Business Administration and Technology Press 2003); Philosophy in Engineering (Academica 2007); Engineering in Context (Academica 2009); and Engineering, Development and Philosophy: American, Chinese, and European Perspectives (Springer 2012). Besides, he has coauthored A Hybrid Imagination: Science and Technology in Cultural Perspective (Morgan & Claypool Publishers 2011) together with Andrew Jamison and Lars Botin. In addition, he has published a number of articles on engineering epistemology, culture, and education. Current research interest includes academic drift in engineering education and structural dynamics in higher education.

Andrew Jamison B.A. in History and Science from Harvard University, Ph.D. in Theory of Science from University of Gothenburg (Göteborg). Docent in Theory of Science, University of Gothenburg. Professor of Technology, Environment, and Society at Aalborg University. Coordinator of Program of Research on Opportunities and Challenges in Engineering Education in Denmark (PROCEED), 2010–2013, and author, most recently, of The Making of Green Knowledge: Environmental Politics and Cultural Transformation (Cambridge 2001), Hubris and Hybrids: A Cultural History of Technology and Science , with Mikael Hård (Routledge 2005), A Hybrid Imagination: Science and Technology in Cultural Perspective (Morgan & Claypool Publishers 2011) together with Steen Hyldgaard Christensen and Lars Botin, and The Making of Green Engineers: Sustainable Development and the Hybrid Imagination (Morgan and Claypool 2013).

“The two volumes together provide an extensive space for a varied array of individuals, established and ascending, who are reflecting thoughtfully about engineering education and practice from a variety of perspectives and disciplines at a possible inflection point for the profession.” (Glen Miller, Technology, Knowledge and Learning, Vol. 22, 2017)