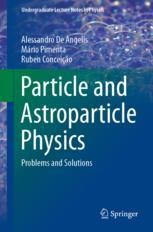 This book presents more than 200 problems, with detailed guided solutions, spanning key areas of particle physics and astrophysics. The selected examples enable students to gain a deeper understanding of these fields and also offer valuable support in the preparation for written examinations. The book is an ideal companion to Introduction to Particle and Astroparticle Physics: Multimessenger Astronomy and its Particle Physics Foundations, written by Alessandro De Angelis and Mário Pimenta and published in its second edition in Springer’s Undergraduate Lecture Notes in Physics series in 2018. It can, however, also be used independently. The present book is organized into 11 chapters that match exactly those in the companion textbook, and each of the exercises is given a title to facilitate identification of the subject within that book. Some new exercises have been added because they are considered helpful on the basis of the experience gained by teachers while using the textbook. Beyond students on relevant courses, exercises and solutions in particle and astroparticle physics are of value for physics teachers and to all who seek aid to self-training.

Alessandro De Angelis is a high energy physicist and astrophysicist. Professor at the Universities of Padua and Lisbon, he is the Principal Investigator of the proposed space mission ASTROGAM. For many years has been director of research at INFN Padua, and scientific coordinator and chairman of the board managing the MAGIC gamma-ray telescopes in the Canary Island of La Palma. His main research interest is on fundamental physics, especially astrophysics and elementary particle physics at accelerators. He graduated from Padua, was employed at CERN for seven years in the 1990s ending as a staff member, and was later among the founding members of  NASA's Fermi gamma-ray telescope. His original scientific contributions are mostly related to electromagnetic calorimeters, advanced trigger systems, QCD, artificial neural networks, and the study of the cosmological propagation of photons. He teaches astroparticle physics in Italy and Portugal and has been a visiting professor at the University of Buenos Aires, the ICRR of Tokyo, the Max-Planck Institute in Munich, and the University of Paris VI. He published four books, more than 800 articles in scientific journals including Science and Nature, and on popularization journals, as well as in journals specialized in the history and philosophy of physics.

Mário Pimenta is a high energy physicist and astrophysicist. Professor at the Instituto Superior Técnico of the University of Lisbon, he is currently the president of the Portuguese national organization for Particle and Astroparticle Physics, representative of Portugal at the CERN Council, coordinator of the international PhD doctoral network IDPASC  and representative for Portugal at the Pierre Auger Observatory in Argentina. His main involvement is on the project of the Southern Wide-Field Observatory (SWGO) in South America. His main interest of research is on high-energy physics, especially cosmic rays of extremely high energy and development of detectors for astroparticle physics. He graduated from Lisbon and Paris VI, and was employed at CERN in the late 1980s; was formerly a member of the WA72, WA74, NA38 and DELPHI experiments at CERN and of the EUSO collaboration at ESA. His original contributions have been mostly related to search for new particles, hadronic interactions at extremely high energies,  advanced trigger systems and recently to innovative particle detectors. He has taught general physics and, for more than 20 years, particle and astroparticle physics, lecturing in Portugal, at the University of Udine and SISSA/ISAS in Trieste.

Ruben Conceição is a high-energy physicist and astrophysicist. He is currently a researcher in the Portuguese national organization for Particle and Astroparticle Physics (LIP) and invited professorat the physics department of Instituto Superior Técnico of the Universityof Lisbon. He is an active member of the Pierre Auger collaboration, dedicated to the study of ultra-high-energy cosmic rays, and he covers a leading role in the SWGO collaboration, which plans the next-generation wide-field observatory in the Southern hemisphere to detect and study high-energy gamma rays. His original scientific contributions have been mostly related to the study of high-energy hadronic interactions, understanding and modelling extensive air showers, and the conceptual development of innovative detection techniques and cosmic ray physics methods. He has been teaching high-energy particle physics and astroparticle physics in Master courses in Portugal and in several international PhD schools. He is a regular visiting scientist at the University of Santiago de Compostela, Spain, and at the Pierre Auger Observatory in Malargüe, Argentina.