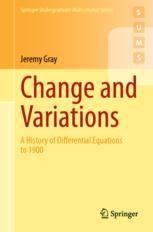 A History of Differential Equations to 1900

This book presents a history of differential equations, both ordinary and partial, as well as the calculus of variations, from the origins of the subjects to around 1900. Topics treated include the wave equation in the hands of d’Alembert and Euler; Fourier’s solutions to the heat equation and the contribution of Kovalevskaya; the work of Euler, Gauss, Kummer, Riemann, and Poincaré on the hypergeometric equation; Green’s functions, the Dirichlet principle, and Schwarz’s solution of the Dirichlet problem; minimal surfaces; the telegraphists’ equation and Thomson’s successful design of the trans-Atlantic cable; Riemann’s paper on shock waves; the geometrical interpretation of mechanics; and aspects of the study of the calculus of variations from the problems of the catenary and the brachistochrone to attempts at a rigorous theory by Weierstrass, Kneser, and Hilbert. Three final chapters look at how the theory of partial differential equations stood around 1900, as they were treated by Picard and Hadamard. There are also extensive, new translations of original papers by Cauchy, Riemann, Schwarz, Darboux, and Picard.

The first book to cover the history of differential equations and the calculus of variations in such breadth and detail, it will appeal to anyone with an interest in the field. Beyond secondary school mathematics and physics, a course in mathematical analysis is the only prerequisite to fully appreciate its contents. Based on a course for third-year university students, the book contains numerous historical and mathematical exercises, offers extensive advice to the student on how to write essays, and can easily be used in whole or in part as a course in the history of mathematics. Several appendices help make the book self-contained and suitable for self-study.

Jeremy Gray is an Emeritus Professor at the Open University and an Honorary Professor of Mathematics at the University of Warwick. He is an Inaugural Fellow of the American Mathematical Society, and for his work in the history of mathematics he was a recipient in 2009 of the AMS’s Albert Leon Whiteman Memorial Prize, and in 2016 of the Otto Neugebauer Prize of the European Mathematical Society. He is the author or co-author of 13 books on the subject, including Plato’s Ghost: The Modernist Transformation of Mathematics (2008), Henri Poincaré: a scientific biography (2012), and three books on the history of algebra, analysis, and geometry on the 19th century.