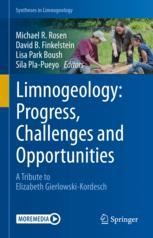 A Tribute to Elizabeth Gierlowski-Kordesch

This book honors the career of Professor Elizabeth Gierlowski-Kordesch who was a pioneer and leader in the field of limnogeology since the 1980s. Her work was instrumental in guiding students and professionals in the field until her untimely death in 2016. This collection of chapters was written by her colleagues and students and recognize the important role that Professor Gierlowski-Kordesch had in advancing the field of limnogeology. The chapters show the breadth of her reach as these have been contributed from virtually every continent.

This book will be a primary reference for scientists, professionals and graduate students who are interested in the latest advances in limnogeologic processes and basin descriptions in North and South America, Europe, Africa, and China.

*Free supplementary material available online for chapters 3,11,12 and 13.
Access by searching for the book on link.springer.com

Michael R. Rosen is a Research Scientist and Water Quality Specialist for Research at the U.S. Geological Survey, California Water Science Center.  His research interests center around delineating the history of contaminants in modern lakes, rivers, and groundwater in the western United States, Australia and central Asia.  In addition, he has worked extensively on the paleoclimate, paleohydrology, and geochemical evolution of playas and Holocene saline lakes.

David B. Finkelstein is an Associate Professor in the Geoscience Department at Hobart & William Smith Colleges.  His research interests include the biogeochemical and geochemical evolution of modern and ancient lacustrine deposits and the signatures of biomass burning events.

Lisa Park Boush is Associate Dean in the College of Liberal Arts and Sciences at the University of Connecticut as well as Professor of Geosciences in the Department of Geosciences.  Her research interests include Earth system processes and the reconstruction of past climate history and its impact on biological, coastal and lacustrine ecosystems.

Sila Pla-Pueyo is a carbonate sedimentologist whose research focuses on the paleoenvironmental characterization of ancient river, wetland and lake records, related to early human occupation in Europe and Northern Africa. She also develops research on how geoscience is taught in bilingual contexts (Spanish-English) in southern Spain.