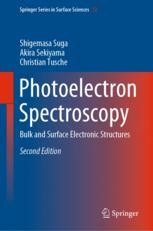 This book presents photoelectron spectroscopy as a valuable method for studying the electronic structures of various solid materials in the bulk state, on surfaces, and at buried interfaces. This second edition introduces the advanced technique of high-resolution and high-efficiency spin- and momentum-resolved photoelectron spectroscopy using a novel momentum microscope, enabling high-precision measurements down to a length scale of some tens of nanometers. The book also deals with fundamental concepts and approaches to applying this and other complementary techniques, such as inverse photoemission, photoelectron diffraction, scanning tunneling spectroscopy, as well as photon spectroscopy based on (soft) x-ray absorption and resonance inelastic (soft) x-ray scattering. This book is the ideal tool to expand readers’ understanding of this marvelously versatile experimental method, as well as the electronic structures of metals and insulators.

Prof. Shigemasa Suga is currently an invited professor at the Institute of Scientific and Industrial Researches (ISIR), Osaka University and, since 2015, a guest professor at the Jülich Research Center in Germany. He is an internationally recognized expert in the field of photoelectron spectroscopy using soft synchrotron x-rays, having authored over 300 scientific papers on the subject and been fully responsible for the world’s first spectroscopy-dedicated synchrotron radiation facility based on an electron storage ring (SOR-Ring, Tanashi-city, Tokyo). Throughout his career, he has been heavily involved in beamline organization and oversight, both in Japan and abroad, and served as co-editor of the Journal of Synchrotron Radiation from 2000-2004. He is recipient of the Eugen und Ilse Seibold Award of the German Research Foundation, and the Helmholtz-Humboldt Research Award of the Humboldt Research foundation.

Prof. Akira Sekiyama is a full professor in the Department of Materials Engineering Science at Osaka University. He is an expert in x-ray investigations of strongly-correlated electronic structures, and was instrumental in developing high-resolution soft x-ray and three-dimensional angle-resolved photoemission techniques at the SPring-8 synchrotron radiation facility. He has published more than 190 papers on photoemission spectroscopy and is recipient of the 2016 award from the International Conference on Vacuum Ultraviolet and X-ray Physics.

Dr. Christian Tusche is head of the Momentum Microscopy group at the Peter Grünberg Institute of the Jülich Research Center. His research focuses on the electronic properties and their spin-dependent dynamics in ferromagnets, strongly correlated electron systems, and topological quantum materials. Throughout his career, he investigated new and efficient ways for performing spin-resolved measurements of the electronic structure of novel materials. He was awarded the Innovation Award on Synchrotron Radiation in 2015 in Berlin, and the prestigious Kai Siegbahn Prize in 2018 in Uppsala. He has authored and co-authored over 60 peer-reviewed papers, book chapters, and patents.

Number of Pages
XXVII, 511
Number of Illustrations
139 b/w illustrations, 111 illustrations in colour
Additional Information
The first edition was published as Vol. 176 in the series: Springer Series in Optical Sciences
Topics