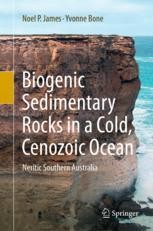 This book documents and interprets the onshore Cenozoic temperate carbonate depositional system along the southern margin of Australia.  These strata, deposited in four separate basins, together with the extensive modern marine system offshore, comprise the largest such cool-water carbonate system on the globe.  The approach is classic and comparative but the information is a synthesis of recent research and new information.  A brief section of introduction outlines the setting, modern comparative sedimentology offshore, and structure of the Cenozoic onshore.  The core of the book is a detailed analysis and illustration of the four Eocene to Pleistocene successions.   Deposits range from temperate carbonates, to biosiliceous spiculites, to marginal marine siliciclastics.  Each unit is interpreted, as much as possible, based on our understanding of the modern offshore depositional system.  A subsequent part concentrates on diagenesis both before and after the late Miocene uplift.  It turns out that alteration in the two packages is entirely different.   The preceding attributes of each succession are then interpreted on the basis of controlling factors such as tectonics, oceanography, climate, and glaciation of nearby Antarctica.  This research has revealed new implications for the interpretation of specific attributes of cool-water carbonate sedimentology that could only be discovered from the rock record.  Insights concerning cyclicity, reef mounds, biosiliceous deposition, and trophic resources are detailed in the next section.  The concluding part focuses on global comparisons, especially the Mediterranean and New Zealand.

Noel James is Professor Emeritus at Queen's University in Kingston Ontario.  He received his doctorate from McGill University, has worked for the petroleum industry, helped establish the University of Miami Comparative Sedimentology Laboratory, and taught at Memorial University of Newfoundland.  Professor James’ research concerns the sedimentology and diagnosis of carbonate sediments and rocks throughout geologic history.  Initial studies focused on reefs in the Caribbean where he helped pioneer the use of research submersibles in reef studies and formulated actualistic depositional models.  Subsequent research focused on Paleozoic carbonate continental margin evolution, Cenozoic reef systems in the Middle East, and Proterozoic carbonates and reefs in Arctic Canada.  He is currently engaged in researching the cool-water carbonate depositional realm, in the Southern Ocean and in the late Paleozoic limestones worldwide.  Professor James has written and co-edited books on Modern and Fossil Reefs, Cool-Water Carbonates, Paleokarst, Facies Models, Precambrian limestones, and Australian cool-water carbonates, and a textbook on the origin of carbonate rocks.  He has been awarded the Twenhofel Medal by SEPM, the Logan Medal by GAC, and the Sorby Medal of the IAS.  He is Fellow of the Royal Society of Canada and Member of the Order of Canada, the Nation’s highest civilian honor.

Yvonne Bone is Retired Associate Professor in the Department of Geology and Earth Sciences, the University of Adelaide, Australia.  She is an honours B.Sc. graduate of that university where she also attained her Ph.D.  Her scientific specialties are regional geology, sedimentary geology, geochemistry, paleontology, and oceanography.  Her original research focused on the origin of Precambrian uranium deposits in the Northern Territory.  Always intrigued by sedimentology, she subsequently turned her research interests to the carbonate rock record.  Focusing first on Proterozoic successions, her interests eventually changed to the intimate relationship between modern carbonates offshore southern Australia today and the Cenozoic rock record.  She has been Chief and Co-Chief Scientist on several marine research cruises off southern and western Australia that resulted in numerous co-authored scientific publications and a well-received book.  At the same time, her research on living and fossil bryozoans stand as landmarks in their field.  Over the years, she has tutored numerous graduate students who now hold prestigious positions worldwide.  Finally, she is a devoted teacher whose students universally laud her wonderful lecturing style and caring mentorship.
Show all