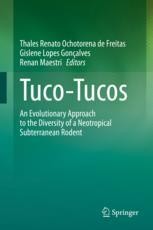 An Evolutionary Approach to the Diversity of a Neotropical Subterranean Rodent

This book examines the biology of tuco-tucos (Ctenomys) from an evolutionary perspective. Historically, these subterranean rodents have long attracted the attention of scientists due to its remarkable chromosomes variability and rapid diversification. A wealth of knowledge on physiology, ecology, genetics, morphology, paleontology, and taxonomy has been documented in the last 70 years through numerous single publications. In this volume, expert investigators review and frame these essays with the breadth of current understanding. The collection of chapters are presented into the major topics: i) Evolution of Ctenomys, ii) Geographic Patterns, iii) Organismal Biology, and iv) Environmental Relationships. Given its scope, the book will be of interest to both students and researchers and may stimulate further research with this exciting model on a wide range of evolutionary topics.

Thales Renato Ochotorena de Freitas has been a Full Professor at the Department of Genetics, Institute of Biosciences, Federal University of Rio Grande do Sul (UFRGS) since 1985. He earned his Ph.D. in Genetics and Molecular Biology (1990) from UFRGS. He has been a Visiting Scholar at the Museum of Vertebrate Zoology, University of California-Berkeley (1996-1997), and visiting researcher at Laboratoire d'Écologie Alpine, University of Grenoble (2013-2014), where he worked on with cutting-edge genomic tools. Dr. Freitas is currently investigating variation at population and species levels in Ctenomys, particularly from groups of the border of the Amazon Forest and Coastal Plain, using cytogenetic and molecular genetics. Dr. Freitas serves as Director of the Graduate Program in Genetics and Molecular Biology at UFRGS and was the founder President of the Brazilian Society of Mastozoology (SBMZ). He teaches classical genetics and conservation genetics to undergraduate and graduate students.

Gislene Lopes Gonçalves  has been an Associate Investigator at the Department of Genetics, Federal University of Rio Grande do Sul (UFRGS), Brazil, and the Universidad de Tarapacá, Chile, since 2014. She earned her Ph.D. in Genetics and Molecular Biology (2011) from UFRGS, where she completed her postdoctoral studies in Zoology (2012-2016). She has been a Visiting Researcher at Museum of Comparative Zoology, Harvard University (2009-2010), where she worked on the genetic basis of hair pigmentation in rodents with Professor Hopi Hoekstra. Dr. Gonçalves is currently interested in editorial works and collaborates with numerous research groups in the scope of evolutionary genetics.

Renan Maestri has been an Assistant Professor at the Department of Ecology, Institute of Biosciences, Federal University of Rio Grande do Sul (UFRGS) since 2018. He is also a Research Associate at The Field Museum of Natural History, Chicago, IL, USA since 2020. He earned his Ph.D. in Ecology (2017) from UFRGS, with a short period in the Field Museum, and completed his postdoctoral studies at the Graduate Program in Animal Biology (2017-2018), UFRGS. Dr. Maestri teaches and advises students in the field of ecology and evolution, and coordinates the Laboratory of Ecomorphology and Macroevolution at the Department of Ecology, UFRGS. He is interested in the areas of Evolutionary Biology, Ecology, and Biogeography, with an emphasis on morphological evolution, macroevolution, and macroecology of complex phenotypes.
Show all