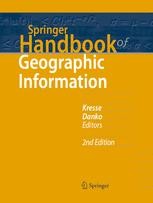 This handbook provides an exhaustive, one-stop reference and a state-of-the-art description of geographic information and its use. This new, substantially updated edition presents a complete and rigorous overview of the fundamentals, methods and applications of the multidisciplinary field of geographic information systems. Designed to be a useful and readable desk reference book, but also prepared in various electronic formats, this title allows fast yet comprehensive review and easy retrieval of essential reliable key information.

The Springer Handbook of Geographic Information is divided into three parts. Part A, Basics and Computer Science, provides an overview on the fundamentals, including descriptions of databases and encoding of geographic information. It also covers the underlying mathematical and statistics methods and modeling. A new chapter exemplifies the emerging use and analysis of big data in a geographic context. Part B offers rigorous descriptions of gathering, processing and coding of geographic information in a standardized way to allow interoperable use in a variety of systems; from traditional methods such as geodesy and surveying to state-of-the-art remote sensing and photogrammetry; from cartography to geospatial web services. Discussions on geosemantic interoperability and security of open distributed geospatial information systems complete the comprehensive coverage.  The final part describes a wide array of applications in science, industry and society at large, such as agriculture, defense, transportation, energy and utilities, health and human services. The part is enhanced by new chapters on smart cities and building information modeling, as well as a complete overview of the currently available open-source geographic information systems.

Using standardized international terminology, in accordance with ISO/TC 211 and INSPIRE, this handbook facilitates collaboration between different disciplines and is a must have for practitioners and new comers in industry and academia.

Wolfgang Kresse is am Emeritus Professor for Geographic Information Systems and Photogrammetry at the University of Applied Sciences Neubrandenburg, Germany. He also held a professorship for remote sensing and image processing at the Politechnika Koszalińska in Poland. As a visiting professor, he was affiliated to the Canada Centre for Remote Sensing in Ottawa (2002/2003) and to the University of Maine, USA (2008/2009). He is the Editor-in-chief of the German journal PFG, Photogrammetry, Remote Sensing and Geoinformation Science. Formerly, he worked as a software developer and customer trainer for Carl Zeiss Company with a focus on graphics, photogrammetry, and data exchange.

In the ISO/TC 211 Geographic information / Geomatics he was the project leader of the ISO/TS 19159, part 1 and 2, as well as the ISO 19165-1.  He was also involved in the development of other ISO standards, as well as in standardization activities of the International Society for Photogrammetry and Remote Sensing (ISPRS) and of the European Spatial Data Research (EuroSDR). Wolfgang Kresse holds a Diploma Degree in Geodesy and a Ph.D. in Digital Cartography, both of the University of Bonn, Germany. He is the primary author of the book ISO Standards for Geographic Information.

David Danko is a Senior Consultant  for GIS standards, interoperability, and geographic metadata with Esri. He ensures that Esri software and services are interoperable and comply with the appropriate national, international, and industry standards.  He has provided workshops on spatial data infrastructures, GIS standards and metadata around the globe and has participated in an advisory role in the development of many regional and national spatial data infrastructures. Before joining Esri, he worked for the U.S. Defense Mapping Agency (DMA), where he was responsible for developing and managing agency policies and programs to ensure standardization and interoperability. He also served as Project Manager for an international research and development initiative that resulted in the development of the Digital Chart of the World (DCW. During his career at DMA he has worked in the areas of remote sensing, analytical triangulation, imagery data extraction and cartographic production.