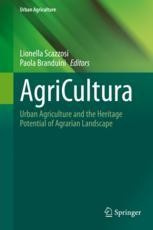 Urban Agriculture and the Heritage Potential of Agrarian Landscape

It focuses the role of the countryside for urban areas, in the history of the city and today. Its attention is on the quality for all areas, both outstanding, ordinary and degraded, as well as large, little or fragmented (European landscape convention 2000).  It considers agricultural landscape as a system of tangible and intangible heritage components and relationships, to be retained, enhanced and transmit, in a process of inevitable but appropriate dynamic conservation and management over time (ICOMOS-IFLA Principles 2017).

This book can benefit the collaboration among local players – such as farmers, citizens, associations, public institutions, stakeholders – in conserving and enhancing agrarian heritage and reinforcing the identity of places and people. It can strengthen collective action and generate positive effects on good large and local -scale management.

The first part has a methodological character in order to enlighten the integrated approach between cultural heritage and urban agriculture. The second part exemplifies cases where the heritage has been recognised but not yet translated into concrete action.  The third Part discloses ongoing process of co-construction, where policies have recognized the cultural, environmental and social meaning of urban agriculture as heritage.

This book aims to reach scholars, local administrations, professionals, farmers and citizens. It involves many authors, many of whom are directly engaged with action-research in safeguarding and implementing the mutual interaction between urban agriculture activities and agrarian heritage.