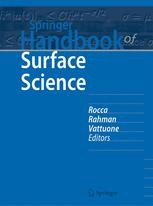 This handbook delivers an up-to-date, comprehensive and authoritative coverage of the broad field of surface science, encompassing a range of important materials such metals, semiconductors, insulators, ultrathin films and supported nanoobjects.

Over 100 experts from all branches of experiment and theory review in 39 chapters all major aspects of solid-state surfaces, from basic principles to applications, including the latest, ground-breaking research results. Beginning with the fundamental background of kinetics and thermodynamics at surfaces, the handbook leads the reader through the basics of crystallographic structures and electronic properties, to the advanced topics at the forefront of current research. These include but are not limited to novel applications in nanoelectronics, nanomechanical devices, plasmonics, carbon films, catalysis,  and biology.

The handbook is an ideal reference guide and instructional aid for a wide range of physicists, chemists, materials scientists and engineers active throughout academic and industrial research.

Mario Rocca is an experimental physicist, working on the experimental measurement of surface phonon spectra, conventional and acoustic surface plasmon dispersion, and gas surface interaction. He graduated in Physics from the University of Genova. He performed his Ph.D. studies on surface phonon anomalies induced by adsorption of gases at the Forschungszentrum Jülich under supervision of Harald Ibach and received his degree from RWTH Aachen University. He was a research staff member at the University of Genoa from 1984 to 1992, when he became Associate Professor. In 2001 he became a Full Professor for condensed matter physics. Mario Rocca vice-chair of the Surface Science Division of the International Union for Vacuum Science, Technique, and Application (IUVSTA) and member of the scientific board of the Italian Union of Scientists for Disarmament. He was editor of the journal Surface Science Reports until 2018, currently he is an editor of Applied Surface Science and of Springer Series in Surface Science.

Luca Vattuone is an Associate Professor of Condensed Matter Physics at the University of Genova since 2012. After graduating in Physics from Genoa University, he received his Ph.D. in Physics for his works on the sticking probability of oxygen on silver surfaces employing a molecular beam and the EEL spectrometer he designed. He was a researcher in the group of D.A. King at the University of Cambridge, as well as the university and INFM in Genoa. His latest works deal with chemisorption at surfaces with well-defined defects, the adsorption of rotationally aligned molecules, the discovery of the acoustic surface plasmon, the self-assembling of molecules,  and finally with graphene chemistry.

Talat S. Rahman is the Pegasus Professor at the Department of Physics at the University of Central Florida. She received her Ph.D. from the University of Rochester and held various academic positions, among which were positions at UC Irvine and Kansas State University, where she was the first female faculty member in the physics department. Her impressive list of visiting appointments includes among others stays at the MPI for Solid-State Research in Stuttgart, Germany, EPFL Lausanne, Switzerland and the Brook Haven National Laboratory, USA. Talat Rahman received numerous fellowships, incl. an Alexander von Humboldt Research Fellowship. She is also a Fellow of the American Physical Society and American Vacuum Society. Her research focus is the multiscale modelling of chemical reactions and related phenomena at surfaces and she is an editorial board member of Progress in Surface Science. Besides her research she actively contributes o reforming STEM education and supporting women and minorities in STEM.
Show all
Reviews

“The present handbook consists of contributions written by numerous experts of this field and covers the main aspects of this fascinating branch of science.” (Gerhard Ertl, Nobel laureate)