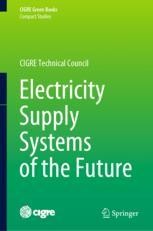 Electricity Supply Systems of the Future

This book offers a vision of the future of electricity supply systems and CIGRE’s views on the know-how that will be needed to manage the transition toward them.

A variety of factors are driving a transition of electricity supply systems to new supply models, in particular the increasing use of renewable sources, environmental factors and developments in ICT technologies. These factors suggest that there are two possible models for power network development, and that those models are not necessarily exclusive:

1. An increasing importance of large networks for bulk transmission capable of interconnecting load regions and large centralized renewable generation resources, including offshore and of providing more interconnections between the various countries and energy markets.

2. An emergence of clusters of small, largely self-contained distribution networks, which include decentralized local generation, energy storage and active customer participation, intelligently managed so that they operate as active networks providing local active and reactive support.

The electricity supply systems of the future will likely include a combination of the above two models, since additional bulk connections and active distribution networks are needed in order to reach ambitious environmental, economic and security-reliability targets. This concise yet comprehensive reference resource on technological developments for future electrical systems has been written and reviewed by experts and the Chairs of the sixteen Study Committees that form the Technical Council of CIGRE.

CIGRE operates the world’s foremost power system knowledge development programme of work. At its foundation is CIGRE’s unique structure and the wide spectrum of domains covered.

CIGRE's global community influences the strategic and technical direction of the knowledge programme based on real world experiences. This is achieved through a range of bodies within the organisation, and then interpreted by the experts of the Technical Council.

Using this approach CIGRE's work remains relevant to the key factors influencing the world's power systems today and in the future.

Iony Patriota de Siqueira holds a D.Sc. (Brazilian Premium) and a B.Sc. in Electrical Engineering, an M.Sc. (honors) in Operations Research, and an MBA in Information Systems, with more than 35 years of experience in operation and maintenance management for infrastructure sectors. An honorary member of CIGRE, strategic advisor and former chairman of CIGRE Study Committee B5 on Protection and Automation, Brazilian Member of TC 57 of IEC, Chairman of ABNT Study Commission on Power Systems Management and Associated Information Exchange, and Convener of CIGRE WG B5.64 on Methods for Specification of Functional Requirements of Protection, Automation, and Control. He has authored four books, is a permanent member of the Brazilian Engineering Academy, and President and CEO of Tecnix Engineering and Architecture, and Technical Director of Brazilian National Committee of Production and Transmission of Electrical Energy.

Nikos D. Hatziargyriou is professor in Power Systems at the Electrical and Computer Engineering School of the National Technical University of Athens (NTUA). He is Director of the Power Systems Division and founder of the "SmartRue" research unit at the Electric Energy Systems Laboratory. From April 2015 to September 2019 he was Chairman and until June 2018, CEO of the Hellenic Distribution Network Operator (HEDNO). From February 2007 until September 2012 he was executive Vice-Chair and Deputy CEO of the Public Power Corporation (PPC), responsible for the Transmission and Distribution Divisions. He was chair and currently vice-chair of the EU Technology and Innovation Platform on Smart Networks for Energy Transition (ETIP-SNET) and former chair of the European Technology Platform on SmartGrids. He is honorary member of CIGRE and past Chair of CIGRE SC C6 “Distribution Systems and Distributed Generation”. He is Life Fellow Member of IEEE, past Chair of the Power System Dynamic Performance Committee (PSDPC) and currently Editor in Chief of the IEEE Trans on Power Systems. He has participated in more than 60 RD&D projects funded by the EU Commission, electric utilities and manufacturers for both fundamental research and practical applications. He is author of the book “Microgrids: Architectures and Control” and of more than 250 journal publications and 500 conference proceedings papers. He is included in the 2016, 2017 and 2019 Thomson Reuters lists of the top 1% most cited researchers.