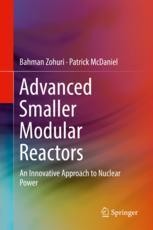 An Innovative Approach to Nuclear Power

This book discusses advanced Small Modular Reactors (SMRs) as a way to provide safe, clean, and affordable nuclear power options. The advanced SMRs currently under development in the U.S. represent a variety of sizes, technology options and deployment scenarios. These advanced reactors, envisioned to vary in size from a couple megawatts up to hundreds of megawatts can be used for power generation, process heat, desalination, or other industrial uses. In-depth chapters describe how advanced SMRs offer multiple advantages, such as relatively small size, reduced capital investment, location flexibility, and provisions for incremental power additions. SMRs also offer distinct safeguards, security and nonproliferation advantages. The authors present a thorough examination of the technology and defend methods by which the new generation of nuclear power plants known as GEN-IV can safely be used as an efficient source of renewable energy.

Dr. Bahman Zohuri is currently an Associate Research Professor with the Department of Electrical and Computer Engineering, University of New Mexico, and principal and founder of Galaxy Advanced Engineering, Inc. (GAE). Dr. Zohuri started GAE after many years in the semiconductor and defense industries as a Senior Process Engineer for corporations including Westinghouse and Intel, and then as Senior Chief Scientist at Lockheed Missile and Aerospace Corporation. While at Lockheed, he was responsible for the study of vulnerability, survivability, and component radiation and laser hardening for the Defense Support Program (DSP), Boost Surveillance and Tracking Satellites (BSTS), and Space Surveillance and Tracking Satellites (SSTS). He also performed analysis of characteristics of laser beam and nuclear radiation interaction with materials, Transient Radiation Effects in Electronics (TREE), Electromagnetic Pulse (EMP), System Generated Electromagnetic Pulse (SGEMP), Single-Event Upset (SEU), Blast and, Thermo-mechanical, hardness assurance, maintenance, and device technology. His consultancy clients have included Sandia National Laboratories, and he holds patents in areas such as the design of diffusion furnaces, and Laser Activated Radioactive Decay. Dr. Zohuri earned his Doctorate in Nuclear Engineering from the University of New Mexico. He is the author of several books on nuclear energy.

Dr. Patrick McDaniel is currently adjunct and research professor at Department of Chemical and Nuclear Engineering, University of New Mexico. Patrick began his career as a pilot and maintenance officer in the USAF. After leaving the Air Force and obtaining his doctorate at Purdue University, he worked at Sandia National Laboratories in fast reactor safety, integral cross section measurements, nuclear weapons vulnerability, space nuclear power, and nuclear propulsion. He left Sandia to become the technical leader for Phillips Laboratory’s has (became part of Air Force Research Laboratory) Satellite Assessment Center. After 10 years at PL/AFRL, he returned to Sandia to lead and manage DARPA’s Stimulated Isomer Energy Release project, a $10M per year effort. While at Sandia, he worked on the Yucca Mountain Project and DARPA’s classified UER-X program. Having taught at the University of New Mexico in the Graduate Nuclear engineering program for 25 years, when he retired from Sandia in early 2009, he joined the faculty at the University of New Mexico full time. He has worked on multiple classified and unclassified projects in the application of nuclear engineering to high energy systems. Dr. McDaniel holds PhD in nuclear engineering from Purdue University. Dr McDaniel is a Research Professor at Nuclear Engineering Department of University of New Mexico at present time.
Show all