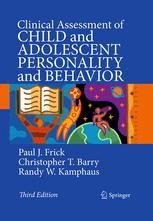 Clinical Assessment of Child and Adolescent Personality and Behavior

As the knowledge base of child clinical and pediatric assessment continues to grow rapidly, so does the need for up-to-date information, explanations, and references—especially now, as commonly used tests are revised and reevaluated regularly, and evidence-based assessment has become the standard for practice. The Third Edition of Clinical Assessment of Child and Adolescent Personality and Behavior is an ideal update, designed to help graduate students and practitioners meet the challenges of assessing – and improving services to – these young clients.

This highly accessible research-to-practice text offers the depth of coverage necessary to understand the field. It is firmly rooted in current knowledge on psychopathology and normative development. The authors review the various types of measures used to assess children’s emotion, behavior, and personality, and they provide clear recommendations for their use. In addition, they emphasize skills, from rapport building to report writing, that are crucial to clinical expertise regardless of theoretical background. Finally, the authors provide clear guidelines for conducting evidence-based assessments of some of the most common forms of psychopathology experienced by children and adolescents.

Clinical Assessment of Child and Adolescent Personality and Behavior is a valuable updated resource for graduate students as well as veteran and beginning clinicians across disciplines, including school and educational psychology, clinical child and adolescent psychology, and counseling psychology.

Randy W. Kamphaus is a Distinguished Research Professor and Head of the Department of Educational Psychology and Instructional Technology at the University of Georgia. In 2003 he received the Russell H. Yeany research award from the College of Education and his second Honors Day Convocation Teaching Award. He is an adjunct faculty member in the neurosciences in education program at the University of Antioquia (Medellin, Colombia).

A focus on issues related to clinical assessment has led Dr. Kamphaus to pursue research in classification methods, differential diagnosis, test development and learning disability and ADHD assessment. He has served as principal investigator, coinvestigator, or consultant on several federally funded research projects dealing with early intervention and prevention, child classification methods, prevalence of ADHD and Conduct Disorder in Latin America, and violence prevention in schools.

As a licensed psychologist and a Fellow of the American Psychological Association (APA), he has contributed extensively to his profession, and he is Past-President of the Division of School Psychology for APA. Dr. Kamphaus has also authored or coauthored 12 books, 5 psychological tests, more than 40 scientific journal articles, and more than 20 book chapters. He also participates in scholarship in the field through work as an editorial board member, associate editor, test reviewer, and newsletter editor. Dr. Kamphaus is a frequent guest lecturer and speaker.

Paul J. Frick is Research Professor of Psychology and Director of the Applied Developmental Psychology Program at the University of New Orleans. Dr. Frick conducts research under the broad rubric of developmental psychopathology. Dr. Frick’s research focuses on understanding the many interacting causal factors that can lead children and adolescents to have serious emotional and behavioral problems and using this research to a) enhance the assessment and diagnosis of childhood psychopathology and b) design more effective interventions to prevent and treat such problems. A primary focus of Dr. Frick’s research is on understanding the dispositional and contextual factors that can place children and adolescents at risk for developing severe antisocial and violent behavior, leading them to be diagnosed with Conduct Disorder or to be arrested for illegal behavior. His work focuses on uncovering and understanding the many different causal processes that can lead children to display such serious conduct problems, with a special focus on children who show a callous and unemotional interpersonal style (e.g., lacking empathy and guilt).

Dr. Frick has published more than 110 manuscripts in either peer-reviewed journals or as book chapters in edited volumes and he is author or co-author of 5 books and test manuals. He has been named Editor of the Journal of Clinical Child and Adolescent Psychology, which is the official journal of Division 53 of the American Psychological Association, the Society of Clinical Child and Adolescent Psychology. He is on the editorial board of two additional scientific journals (Journal of Abnormal Child Psychology and Journal of Abnormal Psychology). Dr. Frick has been invited to present on his research at numerous universities and research conferences across North American and Europe. He was awarded an Honorary Doctorate from Orebro University in Orebro, Sweden in February 2004; he was elected to Fellow status in Division 53 of the American Psychological Association in January 2005; and he received the University of New Orleans International Alumni Association Career Achievement Award for Excellence in Research in June 2005.