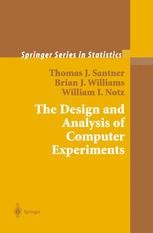 The Design and Analysis of Computer Experiments

The computer has become an increasingly popular tool for exploring the relationship between a measured response and factors thought to affect the response.  In many cases, the basis of a computer model is a mathematical theory that implicitly relates the response to the factors. A computer model becomes possible given suitable numerical methods for accurately solving the mathematical system and appropriate computer hardware and software to implement the numerical methods. For example, in many engineering applications, the relationship is described by a dynamical system and the numerical method is a finite element code. The resulting computer "simulator" can generate the response corresponding to any given set of values of the factors. This allows one to use the code to conduct a "computer experiment" to explore the relationship between the response and the factors. In some cases, computer experimentation is feasible when a properly designed physical experiment (the gold standard for establishing cause and effect) is impossible; the number of input variables may be too large to consider performing a physical experiment, or power studies may show it is economically prohibitive to run an experiment on the scale required to answer a given research question.

This book describes methods for designing and analyzing experiments that are conducted using a computer code rather than a physical experiment. It discusses how to select the values of the factors at which to run the code (the design of the computer experiment) in light of the research objectives of the experimenter.  It also provides techniques for analyzing the resulting data so as to achieve these research goals. It illustrates these methods with code that is available to the reader at the companion web site for the book.

Thomas Santner has been a professor in the Department of Statistics at The Ohio State University since 1990. At Ohio State, he has served as department Chair and Director of the department's Statistical Consulting Service.  Previously, he was a professor in the School of Operations Research and Industrial Engineering at Cornell University. He is a Fellow of the American Statistical Association and the Institute of Mathematical Statistics, and is an elected ordinary member of the International Statistical Institute. He visited Ludwig Maximilians Universität in Munich, Germany on a Fulbright Scholarship in 1996-97.

Brian Williams has been an Associate Statistician at the RAND Corporation since 2000. His research interests include experimental design, computer experiments, Bayesian inference, spatial statistics and statistical computing. He holds a Ph.D. in statistics from The Ohio State University.

William Notz is a professor in the Department of Statistics at The Ohio State University.  At Ohio State, he has served as acting department chair, associate dean of the College of Mathematical and Physical Sciences, and as director of the department's Statistical
Consulting Service.  He has also served as Editor of the journal Technometrics and is a Fellow of the American Statistical Association.

"This is quite a unique book and may fill a void in the design of experiments literature." Techonmetrics, November 2004

"This book will be a valuable reference for for any statistitican who is collaborating with scientists who use computer experiments or is interested in pursuing research in the area." Biometrics, March 2005

"This book describes methods for designing and analyzing experiments conducted using computer program to replace a physical experiment. … To the best of my knowledge, there has been no book yet written in the area of computer experiment. … Therefore, this is quite a unique book and may fill a void in the design of experiments literature. As mentioned in the Preface, this book has tried to keep the mathematics at the level of readers with master’s-level training in statistics." (Lih-Yuan Deng, Technometrics, Vol. 46 (4), November, 2004)

"The book by Thomas Santner et al. illustrates the usefulness of computer models and statistical methodologies to extract information in stimulated data … . Computer modeling has been challenging to the practitioners, and this book eases these challenges with the exposure of basic ideas and daunting formulas. This well written book seven chapters … . The references are exhaustive and current." (Ramalingam Shanmugam, Journal of Statistical Computation and Simulation, Vol. 75 (2), February, 2005)