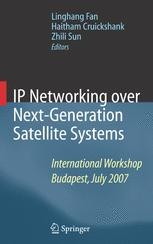 With its broadcasting capabilities and unique coverage, satellite systems have the potential to bridge significant gaps in global connectivity and can play an important role in the shaping of the next-generation Internet. This book highlights the very latest research output of several EU satellite-related projects and addresses many unresolved issues in next-generation satellite systems, such as efficient deployment of IPv6 over satellites, working with WLAN and WiMax, QoS provisioning over multi-segment networks (including satellite networks), multicast networks and security.

Dr. Haitham Cruickshank is a lecturer at the University of Surrey. He has worked there since January of 1996 on several European research projects in the ACTS, ESPRIT, TEN-TELECOM, and IST programs. His main research interests are network security, satellite network architectures, VoIP, and IP conferencing over satellites. He also teaches Data and Internet Networking and Satellite Communication courses at the University of Surrey. He is a member of the Satellite and Space Communications Committee of the IEEE ComSoc and a chartered engineer and corporate member of the IEEE in UK. He is an active member of the IETF and ETSI BSM working group in the security area.

Professor Zhili Sun is the Chair of Communication Networking in the Centre for Communication Systems Research, Department of Electronic Engineering, University of Surrey, UK. He received his B. S. in Mathematics from Nanjing University in China and Ph. D. in Computing Science from Lancaster University, UK. He was a Postdoctoral Researcher, from 1989 to 1993, in the Telecommunications Group, Queen Mary and Westfield College, University of London before coming to Surrey. He has been a principal investigator and technical coordinator in many European projects including the ESPRIT BISANTE, VIP-TEN, GEOCAST, ICEBERGS, SatLife, SATSIX, and Euro-NGI projects. He has also been a principal investigator in UK EPSRC, the European Space Agency (ESA) and industrial projects on IP multicast security. He has supervised many Ph. D. and research fellows. He published a book entitled Satellite Networking: Principles and Protocols (Wiley, 2005) and over 120 papers in International journals and conferences. He has also been a member of technical committees for international conferences and a member of reviewers for EU and UK research proposals.