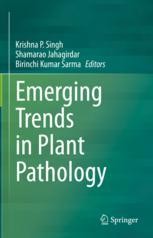 This book offers a comprehensive guide to the identification, detection, characterization, classification and management of plant pathogens and other beneficial microbes in agriculture. The science of plant pathology is a dynamic field and, given the growing interest in sustainable agricultural practices, plant disease management has also gained importance. Further, there has been a shift from traditional chemical-based methods to eco-friendly integrated disease management strategies with a greater focus on bio-control and other eco-friendly technologies. This book provides a comprehensive and timely account of latest concepts and advances in the field of plant pathology, including detection and diagnosis, host resistance, disease forecasting and plant biotechnological approaches. Accordingly, it will be of great interest to academics and all stakeholders working in the fields of plant pathology, microbiology, biotechnology, plant breeding, and other life sciences.

Dr. Krishna P. Singh is a Professor at the Department of Plant Pathology, G. B. Pant University of Agriculture and Technology, Pantnagar, India. He graduated from Gorakhpur University and holds Master’s & Doctoral degrees in Mycology & Plant Pathology from Banaras Hindu University, India. He was awarded UGC and CSIR fellowships. He has been a member of the editorial board of Applied Microbiology (UK), Plant Disease Research, IJPP and Indian Phytopathology. He is also a fellow of IPS, ISMPP and the International College of Nutrition (FICN). He specializes in plant disease epidemiology and forecasting and has published 73 research papers in national and international journals.

Dr. Birinchi Kumar Sarma is a Professor at the Department of Mycology and Plant Pathology, Institute of Agricultural Sciences, Banaras Hindu University, Varanasi, India. A specialist in legume pathology and genomics, he completed his post-doctoral research at the University of California, Davis, USA. He was a Visiting Researcher at Dalhousie University, Canada, under the Shastri Indo-Canadian Institute - FTI Award. He was also made an Associate of the National Academy of Agricultural Sciences, New Delhi. He has published over 85 research papers, edited 3 books and filed 5 patents. He also serves as an editor for the international journals PLOS ONE and Frontiers in Microbiology.

Dr. Shamarao Jahagirdar is a Professor at the Department of Plant Pathology, UAS, Dharwad, India. A specialist in host plant resistance and biological control of crop diseases, he graduated from UAS, Dharwad, and holds Master’s & Doctoral degrees from UAS, Bengaluru. He received an ICAR JRF and SRF from the Government of Karnataka, as well as four international fellowship awards from the governments of Korea, Israel and the Netherlands. He is a Fellow of the Indian Phytopathological Society, International Benevolent Research Forum and Society for Advancement of Biodiversity Science. He has published 150 papers in national and international journals.