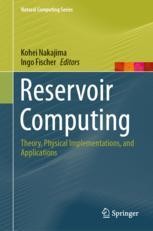 The exciting field of reservoir computing, which originated from a pioneering study on echo state networks and liquid state machines in the early 2000s, has emerged as a highly promising and efficient training scheme for recurrent neural networks. Reservoir computing has developed considerably in recent years, in response to demands for increasingly complex real-time signal processing methods based on new technologies for sensing, communication, and the Internet-of-Things. As such, it is becoming increasingly appealing to a broad range of research fields, not only in the neural network/machine-learning community but also in mathematics, physics (e.g., nonlinear physics, quantum physics, and optics), chemistry, nanotechnology, spintronics, and soft robotics.

Reflecting this growing interest, the book covers cutting-edge research in domains ranging from computational neuroscience to quantum systems, lasers, and optics and being pursued around the globe. Reviewing the current state of the art and providing a concise guide to the field, it introduces readers to its basic concepts, theory, techniques, and physical implementation. As such, it offers a valuable resource for practitioners and researchers alike, as well as those readers with a more general interest in the cutting edge of what is one of the most promising and innovative areas in computing today.

Kohei Nakajima is a project associate professor at the Graduate School of Information Science and Technology in the University of Tokyo.

Ingo Fisher is a professor at the Institute for Cross-Disciplinary Physics and Complex Systems IFISC (UIB-CSIC), Palma de Mallorca, Spain.