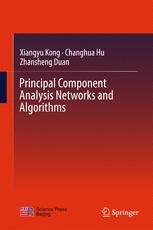 This book not only provides a comprehensive introduction to neural-based PCA methods in control science, but also presents many novel PCA algorithms and their extensions and generalizations, e.g., dual purpose, coupled PCA, GED, neural based SVD algorithms, etc. It also discusses in detail various analysis methods for the convergence, stabilizing, self-stabilizing property of algorithms, and introduces the deterministic discrete-time systems method to analyze the convergence of PCA/MCA algorithms. Readers should be familiar with numerical analysis and the fundamentals of statistics, such as the basics of least squares and stochastic algorithms. Although it focuses on neural networks, the book only presents their learning law, which is simply an iterative algorithm. Therefore, no a priori knowledge of neural networks is required. This book will be of interest and serve as a reference source to researchers and students in applied mathematics, statistics, engineering, and other related fields.

Xiangyu Kong, received the B.S. degree in optical engineering from Beijing Institute of Technology, China, in 1990, and Ph.D. degree in control engineering from Xi'an Jiaotong University, China, in 2005. He is currently an associate professor in department of control engineering at Xi'an Institute of Hi-Tech. His research interests include adaptive signal processing, neural networks and feature extraction. He has published two monographs (both as first author) and more than 60 papers, in which nearly 20 articles were published in premier journal including IEEE Trans. Signal Process., IEEE Trans. Neural Netw. and Learning Syst., IEEE Signal Process. Lett., Neural Networks, and so on. He has presided two projected for national natural science foundation of China.

Changhua Hu, is currently a professor in Department of Control Engineering at Xi'an Institute of Hi-Tech. His research interests include fault diagnosis in control systems, fault prognostics and predictive maintenance. He has published three monographs and more than 200 papers in premier journals including IEEE Transactions, EJOR, and so on. In 2010, he obtained National Outstanding Young natural science foundation. He was awarded National-class candidate of "New Century BaiQianWan Talents Program", and National Middle-aged and Young Experts with Outstanding Contributions in 2012. In 2013, he was awarded Cheung Kong Scholar.

Zhansheng Duan, received the B.S. and Ph.D. degrees from Xi'an Jiaotong University, China, in 1999 and 2005, respectively, both in electrical engineering. He also received PhD degree in electrical engineering from the University of New Orleans, in 2010. From January 2010 to April 2010, he worked as an assistant research professor in the Department of Computer Science, University of New Orleans. In July 2010, he joined the Center for Information Engineering Science Research, Xi'an Jiaotong University as an associate professor. His research interests include estimation and detection theory, target tracking, information fusion, nonlinear filtering and performance evaluation. Dr. Duan has co-authored one monograph: Multisource Information Fusion (Tsinghua University Press, 2006), 50 journal and conference proceedings papers. He is also a member of ISIF (International Society of Information Fusion) and the Honor Society of Eta Kappa Nu, and is listed in Who’s Who in America 2015.