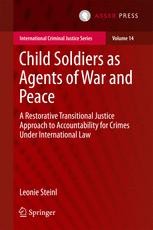 Child Soldiers as Agents of War and Peace

While it might seem as though the discourse is therefore beneficial for child soldiers as it protects them from blame and responsibility, it is important to realize that the so-called passive victim narrative entails various adverse consequences, which can hinder the successful reintegration of child soldiers into their families, communities and societies. This book aims to address this dilemma. First, the available options for dealing with child soldiers’ participation in crimes under international law, such as transitional justice and criminal justice, and their shortcomings are analyzed in depth. Subsequently a new approach is developed towards achieving accountability in a child-adequate way, which is called restorative transitional justice.

Dr. Leonie Steinl, LL.M. (Columbia) is a Researcher and Lecturer at the Faculty of Law of the Humboldt-Universität in Berlin.