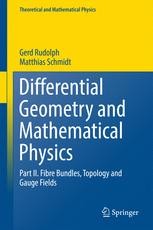 The book is devoted to the study of the geometrical and topological structure of gauge theories. It consists of the following three building blocks:- Geometry and topology of fibre bundles,- Clifford algebras, spin structures and Dirac operators,- Gauge theory.Written in the style of a mathematical textbook, it combines a comprehensive presentation of the mathematical foundations with a discussion of a variety of advanced topics in gauge theory.The first building block includes a number of specific topics, like invariant connections, universal connections, H-structures and the Postnikov approximation of classifying spaces.Given the great importance of Dirac operators in gauge theory, a complete proof of the Atiyah-Singer Index Theorem is presented. The gauge theory part contains the study of Yang-Mills equations (including the theory of instantons and the classical stability analysis), the discussion of various models with matter fields (including magnetic monopoles, the Seiberg-Witten model and dimensional reduction) and the investigation of the structure of the gauge orbit space. The final chapter is devoted to elements of quantum gauge theory including the discussion of the Gribov problem, anomalies and the implementation of the non-generic gauge orbit strata in the framework of Hamiltonian lattice gauge theory.The book is addressed both to physicists and mathematicians. It is intended to be accessible to students starting from a graduate level.

“The monograph is based on a very vast literature containing nearly 700 items, from very classical articles and books to very recent ones. The seven appendices are helpful in reading it. There are several examples and exercises scattered throughout the book. … the book is well organized and clear. The book offers an illuminating and satisfying look at many aspects of modern differential geometry and modern physics and reveals fascinating interactions between pure mathematics and theoretical physics.” (Tomasz Rybicki, Mathematical Reviews, January, 2018)

“This volume starts with a crash course in differential geometry in the Cartan dialect, emphasizing differential forms, followed by a monograph in itself concerning the algebraic topology ... of fibre bundles. … Summing Up: Recommended. Upper-division undergraduates and above; researchers and faculty.” (D. V. Feldman, Choice, Vol. 55 (2), October, 2017)

“Part II of Differential Geometry and Mathematical Physics is a very important pedagogical contribution and a worthy complement to Part I. It presents fine scholarship at a high level, presented clearly and thoroughly, and teaches the reader a great deal of hugely important differential geometry as it informs physics (and that covers a titanic proportion of both fields). Additionally, Gerd Rudolph and Matthias Schmidt do a fabulous job presenting physics is a manner that mathematicians will not find unheimlich. Ausgezeichnet.” (Michael Berg, MAA Reviews, maa.org, May, 2017)

“This book is the second part of a two-volume series on differential geometry and mathematical physics. … The book is addressed to scholars and researchers in differential geometry and mathematical physics, as well as to advanced graduate students who have studied the material covered in the first part of the series. The reader will benefit from remarks and examples in the text, and from the substantial number of exercises at the end of each section.” (Pascal Philip, zbMATH 1364.53001, 2017)