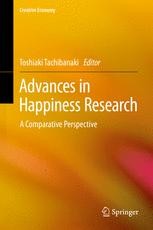 This edited volume makes a contribution to the literature on happiness research by compiling studies based on cross-national research and from diverse academic disciplines. The book is distinctive in that it contains both theoretical and empirical analyses, investigating relationship between causes of happiness and economic behavior relating to employment, consumption, and saving. Most notably, it is one of the first studies in this subject area that analyzes micro data collected in Europe, US and Japan with information on respondents’ attributes and their economic behavior, as well as in measuring inter-temporal happiness by principal factor analysis. Research findings in this volume shed new light on public policies for a number of areas such as employment, family, social welfare, urban and regional planning, and culture. The book draws on a collaborative research project between five institutions of higher education in France, UK, Germany, Switzerland, Belgium, and Japan that lasted for two years.

Tachibanaki, Toshiaki is a professor in Faculty of Economics at Doshisha University and the Director of the Life Risk Research Center. He holds a Ph.D. in Economics, awarded by The Johns Hopkins University in 1973. He has held teaching and research positions at INSEE, OECD, Osaka University, Kyoto University, Stanford University, University of Essex, London School of Economics. He has also served as a director of research groups in the Economic Planning Agency, Bank of Japan, Ministry for Posts and Telecommunication, Ministry of Finance, and Ministry of International Trade and Industry. His research interests cover labor economics, public and financial economics, applied econometrics, economic theory and the Japanese economy.

He is the author of many books including those written in English such as “Capital and Labour in Japan: The Functions of Two Factor Markets” (2012), “The New Paradox for Japanese Women: Greater Choice, Greater Inequality” (2010), “Confronting Income Inequality in Japan: A Comparative Analysis of Causes, Consequences, and Reform” (2009). He has published extensively in journals such as International Economic Review, Review of Economics and Statistics, Journal of Public Economics, Nihon Rodo Kyokai Zasshi, European Economic Review and Financial Review.