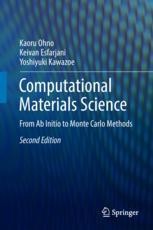 This textbook introduces modern techniques based on computer simulation to study materials science. It starts from first principles calculations enabling to calculate the physical and chemical properties by solving a many-body Schroedinger equation with Coulomb forces. For the exchange-correlation term, the local density approximation is usually applied. After the introduction of the first principles treatment, tight-binding and classical potential methods are briefly introduced to indicate how one can increase the number of atoms in the system. In the second half of the book, Monte Carlo simulation is discussed in detail. Problems and solutions are provided to facilitate understanding. Readers will gain sufficient knowledge to begin theoretical studies in modern materials research.
This second edition includes a lot of recent theoretical techniques in materials research. With the computers power now available, it is possible to use these numerical techniques to study various physical and chemical properties of complex materials from first principles. The new edition also covers empirical methods, such as tight-binding and molecular dynamics.

Dr. Kawazoe is a Professor and Professor Emeritus in New Industry Creation Hatchery Center, Tohoku University, Sendai, Japan. He is the author of over 1,000 ISI journal papers with more than 20,000 citations (h-index 63), over 50 books (including editing), and 10 patents on wide range in science and engineering, mainly computational materials science.  Professor Kawazoe is the founder of ACCMS (Asian Consortium on Computational Materials Science) with the history of 20 years, and has served hard/soft computer resources to researchers in developing countries. He also contributed to start Japan Nano-Science and –Engineering Society 15 years ago and was the President. These societies are now matured and spread out attracting more members. He was a Mega-grant Leader (1 Million US$/year) in Russian Academy of Science from 2012 to 2015 on gas hydrate research. He holds a number of positions in Japan and worldwide; an MRSI honorable member, Advisor Professor of Fudan University, China, President of NPO Center for Interdisciplinary Sciences, Advisor to Japan Gene Research Laboratory and more. He was invited by a number of research/teaching organizations, including Max-Planck Institute for Nuclear Physics, University of California Berkeley, Kuwait Institute of Science and Technology and The University of Tokyo.

Professor Kawazoe has started his research in nuclear physics as a hard core theoretical physicist. He was one of the first generation to use computers in research in Japan. He contributed to start the Education Center for Information Processing, Tohoku University in 1982. He was the first implementing bitnet (present Internet) at a Japanese National University. Later he was promoted to Director of the Computer Center in Tohoku University. He became a full professor in 1990 at the Institute for Materials Research, one of the most famous institutes worldwide. He developed a computer code for materials design, including a number of original tools which other similar codes cannot compute, for example, absolute energy estimation of electronic levels and time course simulation of chemical reactions. He revealed that the present standard of theoretical modeling, such as Hubbard model, is incorrect and showed for example the true origin of magnetism which should change the standard textbooks in solid state physics, quantum chemistry and computational materials science.

Dr. Ohno is a Professor in Yokohama National University, who is working in the field of computational materials science and physics. His Doctor thesis at Tohoku University was "Critical Phenomena at Surfaces" using the renormalization group theory and the high-temperature expansion. After he became Assistant Professor of Tohoku University, he started Monte Carlo simulation on star-polymers with the collaboration with Prof. Kurt Binder.

Four years later, he became Associate Professor of IMR, Tohoku University, and started implementation of the ab initio all-electron code named TOMBO with Prof. Kawazoe. Now TOMBO can do the self-consistent GWΓ calculation, which is the first achievement in the world. His experience in developing this code strongly reflects this book and many detailed explanations and discussions are given in this book. He is doing not only ab initio calculations but also first-principles mappings onto the lattice models. His idea of the potential renormalization theory is the very promising method to map the ab initio results onto the lattice gas models, and now expected a wide application to various materials research subjects.   Dr. Esfarjani is a computational materials scientist with interest in solid-state energy conversion and storage, transport phenomena and thermoelectric materials. He is the leading expert in modeling and computation of thermal transport properties of materials. He was one of the pioneers in introducing the first-principles approach to compute phonon relaxation rates and deduce the thermal conductivity from solving the Boltzmann transport equation for phonons. His work on silicon showed for the first time the wide distribution of phonon mean free paths, previously assumed as narrow.  He has also extended this approach to treat the effect of electron-phonon interactions on thermal conductivity of doped semiconductors. His other research has focused on properties of carbon nanotubes and fullerenes, cross-plane thermionic transport in 2d layered materials, and cluster formation and stability.Dr. Esfarjani is presently a professor in the mechanical engineering department of the University of Virginia. He obtained his PhD in condensed matter theory at the University of Delaware. This was followed by a postdoctoral research at Washington University in St. Louis, before he moved to Japan and started his career in materials science at the Institute for Materials Research of the Tohoku University, where he was assistant and then associate professor. This was followed by appointments at the Sharif University of Technology, University of California Santa Cruz, Massachussets Institute of Technology and Rutgers University, before finally joining the faculty of University of Virginia.
Alles zeigen