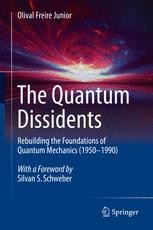 Rebuilding the Foundations of Quantum Mechanics (1950-1990)

This book tells the fascinating story of the people and events behind the turbulent changes in attitudes to quantum theory in the second half of the 20th century. The huge success of quantum mechanics as a predictive theory has been accompanied, from the very beginning, by doubts and controversy about its foundations and interpretation. This book looks in detail at how research on foundations evolved after WWII, when it was revived, until the mid 1990s, when most of this research merged into the technological promise of quantum information. It is the story of the quantum dissidents, the scientists who brought this subject from the margins of physics into its mainstream. It is also a history of concepts, experiments, and techniques, and of the relationships between physics and the world at large, touching on themes such as the Cold War, McCarthyism, Zhdanovism, and the unrest of the late 1960s.

“A considerable amount of the content of this book has been published before in the form of articles, some of them coauthored. ... Among its other merits, then, The Quantum Dissidents may spur further investigations into what distinguishes work on the foundations of physics from just doing physics and what it takes for a type of scientific research to lie in the 'mainstream' of a discipline.” (Adrian Wüthrich, ISIS, Vol. 107 (2), June, 2016)

“This is a historical account of the development, controversies, and political aspects of quantum theory. … This is one of the most interesting history books available on the history and development of Quantum Mechanics. I recommend this for all students and scholars interested in this branch of Physics.” (Joseph J. Grenier, Amazon.com, May, 2016)

“The book is structured chronologically. … The Quantum Dissidents is an impressive book and will be, perhaps ironically, foundational for further studies.” (Suman Seth, Physics Today, Vol. 69 (4), 2016)

“Several themes are consistently integrated in this book. Freire shows how the political and cultural context influenced the choice and timing of certain research topics, although he refrains from claiming that the results obtained by the researchers were also influenced. Ultimately, "The Quantum Dissidents" casts a glance on an episode of the development of quantum mechanics whose importance we have long underestimated. The interplay of the book’s different themes in fact makes it a rewarding and very pleasant read.” (Translated from French, Louis Marchildon, Physics in Canada/La Physique au Canada, Vol. 71 (4), December, 2015)

“Freire’s comprehensive history of the quantum dissidents is meticulously documented and based to a large extent on archival sources and interviews. … The quantum Dissidents is a pioneering work in the historiography of modern physics, of equal interest to historians of science, philosophers of science, and practicing physicists. I warmly recommend it.” (Helge Kragh, Science & Education, March, 2015)