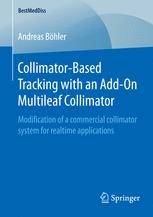 Modification of a commercial collimator system for realtime applications

In this thesis, a tracking system was developed by modifying an add-on collimator, the Siemens Moduleaf, for realtime applications in radiotherapy. As the add-on collimator works almost completely autonomously of the linear accelerator (LinAc), no modifications to the latter were necessary. The adaptations to the Moduleaf were mainly software-based. In order to reduce the complexity of the system, outdated electronic parts were replaced with newer components where practical.

Verification was performed by measuring the latency of the system as well as the impact on applied dose to a predefined target volume, moving in the leaf's travel direction. Latency measurements in software were accomplished by comparing the target and current positions of the leaves. For dose measurements, a Gafchromic EBT2 film was placed beneath the target 4D phantom, in between solid water plates, and moved alongside with it.

Based on the results, a tracking-capable add-on collimator seems to be a useful tool for reducing the margins for the treatment of small, slow-moving targets.

After his graduation in 2014, Andreas Böhler co-founded the R'n'B Medical Software Consulting GmbH headquartered in Linz/Austria. The company focuses on quality management consulting and also offers a fully electronic quality management system. Given the strong medical and technical backgrounds of the founders, they are also specialised in clinical evaluations.