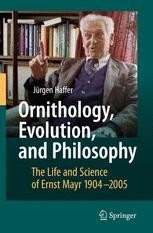 This book is the first detailed biography of Ernst Mayr. He was an ‘architect’ of the Synthetic Theory of Evolution, and the greatest evolutionary biologist since Charles Darwin, influential historian and philosopher of biology, outstanding taxonomist and ornithologist, and naturalist. He is one of the most widely known biologists of the 20th century.

Mayr used the theories of natural selection and population thinking as theoretical models within the framework of historical biological studies. He suggested that various competing paradigms may exist side by side and more or less pronounced ’revolutions’ may occur in different fields from time to time. Changes of concepts have a much stronger effect on the development of biological sciences than the discovery of new facts. Mayr was the first to emphasize the role of biopopulations, thereby pointing out the basic difference between ’population thinking’ and typological essentialism. Population thinking takes into consideration the uniqueness of each individual and unlimited variation of populations which may lead to the development of new species. On the other hand, typologists assume that the unchanging essence of each species determines variation and fixed limits of variation preclude speciation from occurring except through saltation.

Jürgen Haffer majored in geology and paleontology obtaining a PhD degree at the University of Göttingen. He became an exploration geologist and lived in South and North America, Iran, Egypt, and Norway. During these assignments he studied the bird faunas of Amazonia and Iran and has been in close communication with Ernst Mayr. He also co-published a biography of Erwin Stresemann, Mayr’s teacher and friend in Berlin, Germany.

Jürgen Haffer was born in 1932. He majored in geology and paleontology obtaining a PhD degree at the University of Göttingen in 1957. He became an exploration geologist and lived in South and North America, Iran, Egypt, and Norway. During these assignments he studied the bird faunas of Amazonia and Iran and has been in close communication with Ernst Mayr since the early 1960s. He also co-published a biography of Erwin Stresemann, Mayr’s teacher and friend in Berlin, Germany.

"Haffer’s book is clearly … for historians and philosophers of science, for evolutionary and other biologists with an interest in one of the eminent personalities in their field in the 20th century, and for advanced students in biology and philosophy, which already have a background in the philosophy and history of evolutionary biology. … a fascinating piece of historical analysis and description. It is now and will always be the initial point for any historical work on Ernst Mayr … ." (Michael Ohl, Zoosystematics and Evolution, Vol. 84 (2), 2008)

"To provide both a biography of Ernst Mayr and an interpretive overview of his scientific contributions in a single book is a daunting task, but Jürgen Haffer succeeds admirably. … Throughout the book, Haffer blends a chronology of Mayr’s personal life with an analytical review of his contributions to various disciplines. … The book is a good read for anyone interested in evolutionary ideas, in how science progresses, or in the career of an amazing scientist." (M. Ross Lein, Ibis, Vol. 150, 2008)

"In Ornithology, Evolution, and Philosophy, Jürgen Haffer chronicles Mayr’s life and his research. …the book will be useful not only to Mayr scholars but also to anyone wishing to understand the progress of evolutionary biology through the last century." (Trevor Price, Bioscience, Vol. 54 (2), February, 2009)

"Jürgen Haffer opens his biography of Ernst Mayr with an overview of his elegant, comprehensive work: the ornithologist, evolutionist and historian/philosopher of biology is described in detail. … Haffer’s monograph … will become a classic in the literature on the history of twentieth century biology. … This first biography, which contains many unpublished photographs such as a picture showing ‘the three Mayr brothers in Kempten (Allgäu, Bavaria), August 1907,’ will certainly open a series of books on Ernst Mayr and his outstanding scientific achievements." (U. Kutschera, Evolution: Education and Outreach, Vol. 2 (3), 2009)